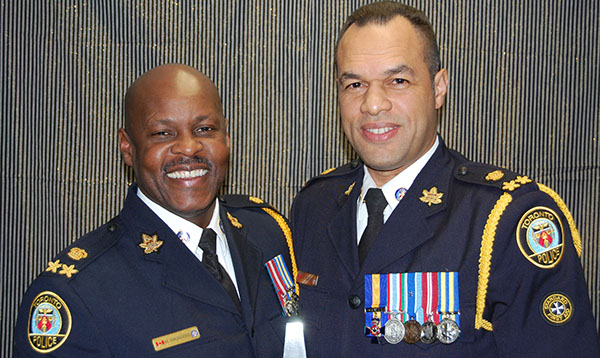 IT’S TIME FOR A BLACK POLICE CHIEF OF TORONTO

Chief Blair will complete his term of office on April 25, 2015, after serving at the helm of Canada’s largest police service for ten years.

Now the focus is on who will replace him and there are many speculations in the media, community, and beyond. We say that it’s time for a Black Police Chief of Toronto in a city whose motto is “Diversity Our Strength” and where there are qualified candidates from the Black community.

According to demographic projections of Statistics Canada in 2011, the ethnocultural diversity of Canada’s population will increase greatly by 2031. The vast majority (96%) of Canadians belonging to a visible minority group will likely live in one of the 33 census metropolitan areas, and visible minority groups could comprise 63% of the population of Toronto, 59% of Vancouver and 31% of Montréal.

The TPSB noted that Chief Blair has had a long and distinguished policing career with the Toronto Police Service and is widely viewed as a champion of community policing and a leader in law enforcement around the world.
The Board said he has demonstrated his commitment to issues of human rights, diversity and integrity, among many others, and has served Toronto admirably and tirelessly.

Indeed, Chief Blair scores high in all those areas highlighted and one remembers interviews and public statements by Barbados-born former Black Deputy Chief Keith Forde – the first Black Deputy Chief — in which he commended the Chief for his leadership on issues of diversity and inclusivity throughout the organization – from executive command to rank and file.

Chief Blair has also acknowledged that racial profiling is practiced by the Toronto Police Services and has instituted actions that have resulted in the Police and Community Engagement Review (PACER) Report but it was when the civilian oversight body to whom the TPS reports – the Board – invited input from community members, human rights and civil liberty organizations and saw the community pushback that real change was crafted in a policy to stop carding.

We acknowledge the work of people like Roy Williams, Arnold Minors, Kamala-Jean Gopie, Susan Eng, Sylvia Hudson, Hamlin Grange, Toronto councillor Michael Thompson and others who have helped, cumulatively, over the years in providing leadership at the Board level or working from within organizations that advocated for the creation of polices for the police service that addressed issues of diversity, equity and inclusivity.

Gopie is included here because although she did not sit on the Board, she served on the Ontario Race Relations and Policing Task Force in 1989, which drew attention to reports of systematic racial discrimination in Ontario’s police services, and encouraged the Ontario government to establish mandatory hiring quotas for racial minorities. At the time, 94% of Ontario police were white males.

Dudley Laws of the Black Action Defense Committee had a clarion call for police accountability that bore fruit with the establishment of the Special Investigations Unit (SIU). He was impressed with the changes that he saw under Blair in the make up of the police service, from executive command to rank and file, where reflecting the population of the city was concerned.

TPSB Chair Alok Mukherjee is committed to equity, diversity, human rights and the promotion of qualified officers of diverse backgrounds throughout the organization.

In an interview just before he retired, Forde spoke of the change happening within the police services under Blair and congratulated him for appointing two Black deputy police chiefs.

He intimated that in the future the city could have a Black Chief of Police.

We think the time is now when organizational renewal is the goal as the Board begins to take the necessary steps to embark on the open search for the next Chief of Police for the City of Toronto.

Mark Saunders and Peter Sloly, deputy police chiefs, both of Jamaican descent, have been touted along with others as possible replacements.

Deputy Chief Mark Saunders is in his 30th year with the Toronto Police Service and is currently in charge of Specialized Operations Command.

He was the Superintendent of 12 Division in the city’s west end and before that, he was the Unit Commander of the Homicide Squad, which is the largest of its kind in Canada. Saunders has also served in and has extensive investigative experience in the Professional Standards Unit, Urban Street Gang Unit, Intelligence, Drug Squad, Emergency Task Force and Divisional Policing.

As Deputy Chief of Specialized Operations Command, he oversees 1,258 police officers, 1,037 civilian members and manages a budget of $240 million. Specialized Operations Command is comprised of various investigative squads, and some of the Toronto Police Service’s most critically important units, which support Divisional Policing Command and work hand in hand with municipal, provincial and federal agencies.

The Toronto Police Service website notes that Deputy Chief Saunders is a life-long resident of Toronto and is proudly raising his family here. He continues his personal commitment to provide inclusive, unbiased policing in order to foster and enhance the critically important relationship between the Toronto Police Service and the communities he serves.

When he was promoted to the position of deputy chief, many considered him as being destined to become the next Chief of Police.

Sloly also participated in the following international policing programs: Pearls in Policing, Lithuania Development Mission and the United Nations Peacekeeping Mission in Kosovo as a Command Staff Officer and the Canadian Contingent Commander. He lives in Toronto with his wife and daughter.

When Toronto’s first Black female police officer, Grenada-born Terry James, retired after 30 years in the Toronto Police Service in 2010, she hoped than in the next ten years there will be a female police chief.

Asked by a reporter of the Toronto Star if the city will ever see a Black female police chief, James’ reply was, “You never know.”

Sonia Thomas, born in Toronto of Jamaican parents, is currently the highest ranking Black female police officer and the country’s first Black female inspector. She has been with the service for 28 years.

Kudos must be given to the leadership of Chief Blair and the vision of the Board for seeing the importance of the Toronto Police Service reflecting what the City of Toronto looks like on the streets.

While other areas of the Greater Toronto Area may have seen changes in the leadership of their police services, there is much talk from rank and file members that avenues of promotion that once existed for visible minority or people of colour are now closed. We understand that frustration is rife in some places among rank and file officers and we can only hope that the Boards will provide the leadership necessary to open up possibilities for people of colour in these other areas of Ontario. Otherwise, we think members of the community should demand it.

They/we should ask questions such as, “How come the executive command of your police service does not reflect us?” and “Why?”

The Toronto Police Service is far ahead of many police services where issues of diversity, inclusivity and diversity are concerned and we want it to go one step further by having as its head a Black Chief of Police.

We know Winnipeg has one – Devon Clunis — we want one here in Canada’s largest city.

Over the last 16 years, Toronto has seen a selection of police chiefs who brought their different style of leadership to policing.

There was the softer approach of David Boothby, first Chief of Toronto Police Service, 1998-2000, whose position changed from Chief of Metro Toronto Police and who took over from combative William J. McCormack in 1995 and served in that position until 1997.

The police union challenged many of Boothby’s decisions and this ushered in the rise of Craig Bromell, head of the union. In 1995, officers shut down the Regent Park police division with a wildcat strike over disciplinary proceedings against two officers.

Then there was Julian Fantino, 2000-2005, who had a divisive approach, denied that racial profiling exist and cracked down on public protests. His contract was not renewed by the TPSB, despite a campaign by conservatives to get it renewed. Mike Boyd served as interim Chief of Police from March 1, 2005 to April 6, 2005.

William (Bill) Blair was appointed on April 26, 2005 and has demonstrated a commitment to community-based policing in the midst of some of his problematic decisions such as the work of the Toronto Anti-Violence Intervention Strategy (TAVIS), the handling of protesters at the G20 Summit, and the practice of carding.

Now that change is in the air, we hope that the new police chief will learn from the best practices of the Chief Bill Blair and implement his/her stamp of leadership in this time of renewal and transformation being sought by the Board.

It’s time for a Black Chief of Police of Toronto, and we encourage qualified Black candidates from across the city, province and country – even if the TPSB takes the search international — to step up and seize the opportunity.