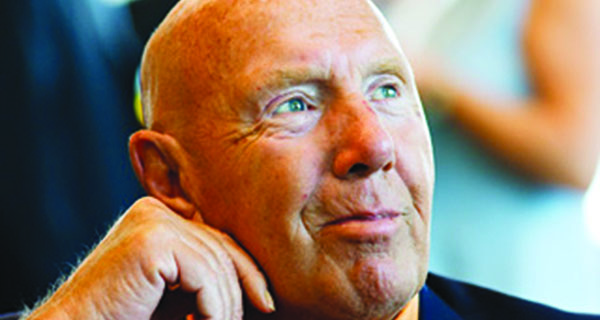 HAMILTON, Ontario, CMC – One of Canada’s richest men is locked in an international battle over Caribbean casinos with links to one of Canada’s most feared mafia clans.

Micahel G. DeGroote, 81, a philanthropist and an officer of the Order of Canada, reportedly lent millions of dollars to three men to create a chain of gaming facilities in Jamaica and the Dominican Republic.

According to reports stemming from a year-long investigation carried out by the Canadian Broadcasting Corporation (CBC) and the Globe and Mail, there is no evidence that at the time DeGroote knew of the men’s “underworld connections”.

It’s reported that in 2010, DeGroote, 81, who built Hamilton-based Laidlaw Transport into one of North America’s biggest waste-haulage firms before selling his stake in 1988, ran into an old friend, a businessman named Andrew Pajak.

CBC News said Pajak told DeGroote that he was working with two brothers, Antonio and Francesco Carbone of Vaughan, Ontario, on a company manufacturing electronic slot machines and they had plans to install them at a nightclub casino in Jamaica.

DeGroote initially agreed to put up US$5 million in December 2010 and by May 2012, the billionaire’s total underwriting of the Caribbean operations stood at US$111.9 million.

The Dream Group was making good on its loans, but in May 2012, the payments to DeGroote stopped.

In October of that year, DeGroote sued to get access to the company’s books, alleging the Carbones and Pajak had misappropriated portions of the funds.

A Canadian judge, in November 2013, said that DeGroote had established “a strong case” for fraud.

While DeGroote’s legal battles with the Carbones progressed in the first half of 2013, “other characters with a dubious past entered the fray,” CBC News said.

In May of that year, it said DeGroote was visited by two men at his family’s luxury condo in downtown Toronto.

One of them was Peter Shoniker, an outgoing former Crown attorney, “who had been convicted of money laundering in 2006.”

It said the other was a “large, broad-chinned man” introduced as Alexander Visser.

“Unbeknownst to DeGroote, Visser had a long criminal history, amounting to more than 40 convictions in Canada for fraud, uttering threats and assault,” the report said.

At the meeting, CBC News said Visser made a “stunning offer”, saying he could get Dream employees in the Dominican Republic to sign affidavits claiming the Carbones had massively defrauded DeGroote, but for a price.

Initially, DeGroote objected, but eventually, he began negotiating over the asking price and told Visser he would send him US$150,000 with “no strings attached” for possible future help.

DeGroote declined to be interviewed by CBC and the Globe and Mail, but through his lawyers, he said the secret recordings were manipulation, created by “individuals with a long history of practicing deceit.”

In his only on-the-record statement about the Dream fiasco, issued through his lawyers, DeGroote said: “Frankly, I sincerely regret that I ever agreed to invest in this venture. Indeed, I am embarrassed by it.”

His lawyers later added: “Mr. DeGroote is someone who has been wronged, rather than a wrongdoer.”