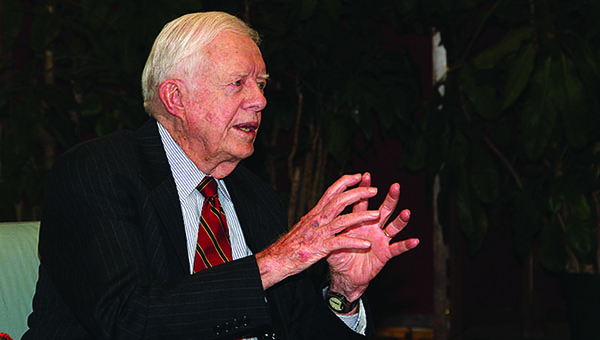 Former US President To Head Observer Team To Guyana Polls

“I look forward to leading our delegation to observe Guyana’s elections on May 11,” Carter said.

“The Carter Center has a long history in Guyana and great respect for the Guyanese people. These will be the fourth elections we have observed there since 1992, and we trust they will be peaceful and inspire hope for the future.”

The Carter Center is joining the Organization of American States (OAS) that have been invited to monitor the polls by the Guyana government.

The Carter Center, in a statement, said, that the core team of experts will be joined this week by six medium-term observers, together representing nine countries.

The Center’s observers will meet regularly with representatives of the Guyana Elections Commission, political party candidates, civil society organizations, the international community, and citizen election observers to assess electoral preparations and the pre-electoral environment, including election administration, campaigning, voter education, and other issues.

They will be joined by a larger delegation of election observers in May, led by Carter, who will assess the voting, counting, and tabulation processes.

The election here is seen as a straight fight between the ruling People’s Progressive Party/Civic (PPP/C) which is seeking to extend its more than two decades hold on power and the coalition alliance comprising the main opposition A Partnership for National Unity (APNU) and the smaller Alliance for Change (AFC).