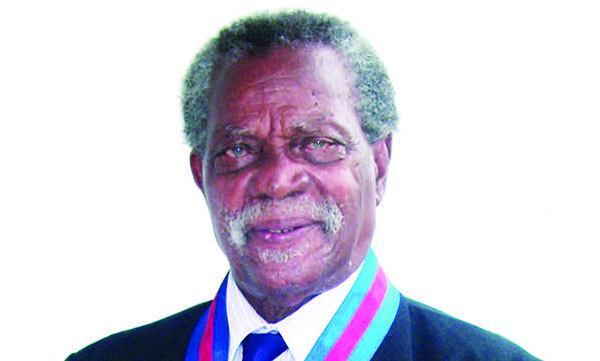 Photo above: Dunstan St. Omer after being knighted in April 2010, in St. Lucia, by the Governor General on the advice of Her Majesty the Queen, he was invested with the insignia of a Knight Commander of the Order of St. Michael and St. George (KCMG).

CASTRIES, St. Lucia, CMC – Sir Dunstan St. Omer, the renowned artist and muralist who designed the national flag of St. Lucia, has died. He was 87.

The Folk Research Centre (FRC) said that Sir Dunstan’s murals graced the altars of many St. Lucian churches, including the notable Holy Family Mural at Church of the Holy Family at Jacmel, Roseau.

In 1946, Sir Dunstan left St Lucia for Curacao to work with Dutch Oil; there he was influenced by Greek painter, Pandelis.

When he returned to St Lucia in 1949, he received a scholarship to go to Puerto Rico, where he studied art for a year and returned home to work with mentor, Harry Simmons, as sub-editor at the Voice newspaper, eventually replacing him from 1959-1962.

Sir Dunstan worked with the Ministry of Education as an art specialist, and remained there until he retired in 2000.

Sir Dunstan’s first mural was commissioned by Fr. Joseph Vrignaud, for the altar of Our Lady’s Chapel at La Clery, north of here.

He would go on to paint several more throughout the island, drawing acclaim and criticism for his depictions of black divinity.

‘If my faith depends on Christ being white, I think I will lose my faith, because the relationship that exists in the world between the white race and the black race, is one of prejudice and inferiority for the blacks,” Sir Duncan once stated.

He was awarded a Papal Medal by the Catholic Church and the St Lucia Cross by the St Lucia government, on the occasion of the island’s 25th Anniversary.

In 2007 the FRC declared him a National Cultural Hero and, two years later, he received an honorary Doctor of Letters degree from the University of the West Indies, followed, a year later, by the award of the Knight Commander of the Order of St Michael and St George (KCMG).

Sir Dunstan, who was regarded as the father of the prismism style of painting, was married to Cynthia St. Croix. They had nine children.