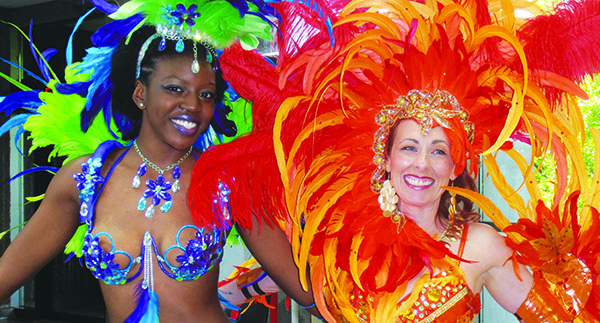 Photo above: Sade Felix (left) and Loca Lola will be in the parade as part of the first-time band, Durham Mas. Photo by Lincoln Depradine.

TORONTO, Ontario — Fence-jumpers be warned: the Festival Management Committee (FMC), City of Toronto and Toronto Police will be cracking down on spectators who, jump barriers, and mingle with costumed masqueraders participating in the Scotiabank Caribbean Carnival on Lakeshore Boulevard.

“We will not allow anyone on the road this year,’’ FMC CAO Chris Alexander promised at the media launch of the 2015 carnival Tuesday at the Ontario Science Centre.

Alexander’s pledge was echoed by Toronto Councillor Joe Mihevc, who said the city and the police will support the FMC in preventing fence-jumping.

“It is not cool to jump those fences,’’ Mihevc said.

The launch included officials from many sponsors, including Christine Williams who represented Scotiabank.

Live music and modelling by revelers of several mas’ bands, including one from Durham that will be participating in the Lakeshore Boulevard parade for the first time, also formed part of Tuesday’s event.

Mihevc said City of Toronto is contributing $560,000 to the festival; it’s double the amount from the Province of Ontario, and compared with $80,000 from the federal government.

“We need to get the feds to up its game,’’ Mihevc said.

This year’s theme is “Carnival of the Americas’’, in tribute to the Caribbean and Latin American countries that will be participating in the Pan Am and Parapan American Games in Toronto, starting in July.

The carnival parade will begin and end at Exhibition Place, where bands will be judged.

In addition to the competing bands, there will be two others: guest bands and “cultural bands’’, depicting various countries’ carnivals including Brazil’s, Cuba’s and Haiti’s.

The FMC will be hosting a non-competitive “Pan Ignite’’ event, separate from the “Pan Alive’’ competition of the Ontario Steel Pan Association that will be at Lamport Stadium.

This year, a calypso monarch competition will not be held, Alexander said.

Instead, there will be a “Calypso Extravaganza’’, featuring Toronto-based artistes and renowned performers from other countries.