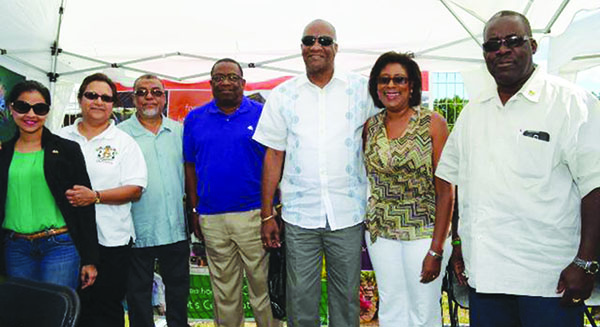 TORONTO, Ontario — On a recent trip to Toronto, Guyana Minister of State, Joseph Harmon, was loud in his praise for many in the country’s Diaspora, who expressed interest in returning home, and assured them that his Government was waiting with open arms to welcome them.

The Minister of State and Tourism Minister, Cathy Hughes, led a small delegation to Canada, during the Toronto Carnival weekend, in order to update Guyanese in the Diaspora of the new administration’s plans and objectives.

The delegation, which also included a tourism official and representatives from the 50thIndependence Anniversary Commission, received loud praises for their decision to visit Canada during “Last Lap Lime”, an event in Toronto, which attracts the largest amount of Guyanese.

The delegation visited Toronto to engage the Diaspora at the 20th anniversary of the annual event which is put on by several alumni associations linked to schools in Guyana. Prior to their attendance at the event, which attracted some 3,000-plus patrons, the Ministers hosted a meeting with local business persons at the Crown Plaza Hotel in Toronto.

The meeting focused on the business community’s interest in the new Government’s approach to stem various issues which were of concern to them with regards to investing in Guyana.

Minister Hughes outlined the steps that are currently being taken in the tourism sector, as well as the Government’s commitment to reducing crime, an issue which the attendees expressed grave concern over.

She outlined the administration’s confidence in its Minister of Public Security, and emphasized to the group that every effort was being made to curb the current crime situation in Guyana.

Minister Harmon for his part welcomed the fact that the attendees took time out on a Sunday which was also a weekend of celebrations, to engage with him and his counterpart in matters of interest to them.

He outlined the Government’s focus on creating a level playing field for all prospective and current investors, and extended an invitation for the interested parties to visit Guyana and meet with the appropriate authorities within the specific areas of their interest.

Minister Harmon further stated that the Government, even though it is only a few months old, was already putting systems in place to ensure transparency and accountability in every sector.

The Minister emphasized that fact that while the Opposition may be uttering instances of victimization and character assignation of former Government officials and operatives, there is clear evidence of mismanagement and abuse of the treasury by a number of former officials.

In further responding to the question of witch hunting, Mr. Harmon assured those concerned that the Government was not out to put anyone in any particular embarrassing situation.

He however, stressed that once the State Assets Recovery Unit found that there was abuse in the disbursement of public equipment and assets, the perpetrators will be challenged and if found guilty, will face the full brunt of the law.

At the “Last Lap lime”, the team also set up a fully informational booth displaying banners, flyers, brochures and other tourism and investment information. Minister Hughes who was assisted by Senior Tourism Development Officer – Sanchia Persaud, manned the booth along with Guyana’s Honary Consul in Toronto – Ms Sattie Sawh. Meanwhile, both Ministers took the opportunity to address the large Guyanese audience about their various concerns and the opportunities which now exist. Minister Hughes first thanked the Diaspora for their support in working to bring change in Governance, as well as their contributions in which ever shape or form that helped to create that change.

Minister Hughes invited them to come home and experience a new shift in Guyana’s hospitality with the establishment of the many resorts and visitor attractions which are available nationwide.

She also praised the carriers serving Guyana currently, but was also exceptionally loud in praise for Fly Jamaica, who apart from providing air services, was putting systems in place to establish reduced fares and additional opportunities for Guyanese to experience both Jamaica and Guyana in a two hop vacation package.

Minister Harmon praised the Guyanese-Canadians for their continuous support of the Government’s programs and objectives, and their willingness to embrace the changes now taking place.

He noted that while rubbing shoulders with the wide cross section of the Diaspora, he continuously felt the warmth and admiration Guyanese still hold for their country. He thanked the promoters of the event for inviting the delegation, and urged them to continue the good work of keeping Guyanese in the social loop even though the event is a once yearly activity.

While responding to shouts from the audience about the sloth in Government not bringing persons who misused public trust and confidence to quick justice, the Minister appealed to the audience to have patience as a system of investigations and audits were underway, and very careful assessments were to be done to ensure compliance to the objective of the process.

The audience was also appraised on the expectations and programmes planned for the 50th Anniversary of Guyana’s Independence by Commission member Bobby Vieira.

Also forming part of the delegation were Col Larry London (ret/d) and Political Affairs head in the Ministry of the Presidency – Fredrick Mc Wilfred.

The group returned to Guyana on Tuesday, August 4.