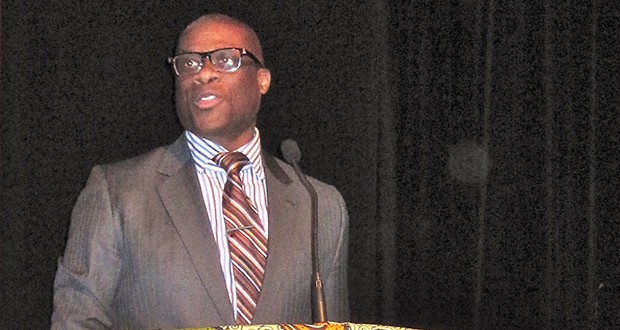 BRAMPTON, Ontario — A black Ontario judge is concerned that black parents are lowering their expectations of their children in such a way that it is actually causing a problem.

Justice Donald McLeod said the problem is this is not allowing “our kids to understand that what we demand is excellence, and either we start that way or we will not finish the right way.”

McLeod, who was appointed to the Ontario Court of Justice in 2013, says he cares about the community getting better, and examined the lyrics of popular music figures, Drake and Beyonce, to support his assertion that music is more than melody.

He was the keynote speaker at the 15th annual Black History Month concert, organized by the Peel United Cultural Partners, a collaboration of United Achievers’ Club and the Congress of Black Women Canada – Brampton Chapter on February 20 at the Lester B. Pearson Theatre in Brampton.

Justice McLeod said he has a burden on his heart for, specifically, black boys.

“Because I have that burden for black boys and second-generation kids, I tend to talk about that a lot. The reason why I talk about that a lot is because although we’re having a Black History Month and we can all come here and we can pat ourselves on the back that we’ve done great things because it’s Black History Month, I don’t believe it’s that season neither. I think it’s a time for us to actually get together and work.”

The lyrics of songs at that time, he said, often reflected the exact situation that the activists were confronting at the moment.

“If they were arrested at a rally they would often sing the songs in jail to keep their spirits up so what music did was it at least gave us a vehicle, an opportunity to be able to explain our story in song.”

He said the movement kept growing and activists wanted to have more respect, so Aretha Franklin sang “Respect.” 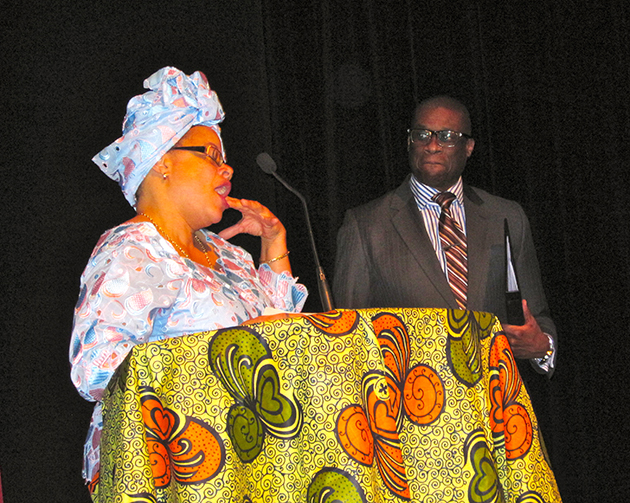 “She decided that in order for our generation to understand what was going on at the time, it was important for music to at least reflect what was happening with the movement, keeping in mind that the theme I’m talking about is music is more than melody. The idea that music is so important, the idea that music is one of those things that at least can capture a generation but it speaks to the things that are happening at the time.”

In examining what the community is confronting now, Justice McLeod shared findings from “Fighting An Uphill Battle, a study done in the Region of Peel funded by United Way.

In Ontario, the percentage of black youth not graduating from high school in Toronto is around nine percent, its approximately twenty-three percent elsewhere.

Blacks earn approximately seventy-six cents less on every dollar earned by a white worker. Blacks account for ten percent of prisoners in Canadian jails but comprise only three percent of the Canadian population.

Black boys are dropping out of high school at a rate of forty percent, a percentage Justice McLeod said he found in another study online.

Sixty percent of students born in Caribbean and fifty-five percent of boys born in East Africa are failing in all subjects in Grades 7 and 8.

Black boys represent one of the largest groups of young men not passing the Grade 10 literacy test and not graduating from high school.

“The Toronto Star reported that black males are often overrepresented in the prison system. They are proportionally four times more black boys in the jail population than they were represented in the general population. United Nations suggests that we here today in this country have urgent problems that require urgent measures. The short-term impact of these negative social indicators is the impoverishment and social exclusion of blacks in Canadian society. This is where we are now. The long-term impact is the build up of rage and sadness in the psyche of the black population and their feelings of alienation and estrangement from mainstream Canadian society,” he said.

Referencing second-generation Canadians, a study showed that they do not achieve the high levels of education that their immigrant parents have so it means that second-generation kids are actually doing worse than their parents who were not even here, he said.

“If it seems that I’m raining on your parade it’s because I am, because what I want us to do today when we leave is not think that we just came in here the same and we’re going to leave the same, but we’re going to have to do something about this,” he said.

The Ontario Court of Justice judge said “the lyrics of our music is very important.”

Exploring the lyrics of Drake’s “Hotline Bling” and Beyonce’s “Formation,” Justice McLeod said Drake’s song is saying that women are wearing less when the reality for the community is in the figures that he shared from the studies.

He said Beyonce is now singing a song that has to represent what she believes is black empowerment but “she’s saying that if you have sex with her the right way, she’ll take you to Red Lobster—it’s garbage.”

“I am prepared to tell you that it’s garbage, that what’s happening is that our kids are putting in their minds the things that are not helping them. That what we’re doing, as a community, is that we’re not getting back to basics but we’re allowing ourselves to be so entranced by what the world thinks is success to the point that we realize that we just let anything goes.”

He said a balance is required instead of just having Beyonce, Drake, B.E.T., and children being left in front of the television to just watch that.

Justice McLeod also alluded to the television show, Empire, and noted that: “Our reality is not that, but our reality is that we are losing kids in school at such a high rate that we don’t realize what we’re doing. They say this, that if you don’t get 16 credits by the age of 16, there’s an eighty percent chance that you won’t even finish high school.”

His thesis is that a black community, such as Peel, where children and youth make up forty-four percent of its black population, many of which are second- and third-generation children and young people, will have, as a going concern, the need to reinforce the notion of excellence without excuses.

“We need to be ever vigilant to ensure that this generation of children and youth are not found lost in a system which refuses to die but continuously perpetuates itself. We’ve relaxed, we’re lowered our standards, we’ve spent more than we can afford, we are busy keeping up lifestyles and not concentrating on our children. This is just the beginning.

“So why do I say this. I say this because we often hear this phrase, “black lives matter.” Black lives matter because when a child is shot down dead and he’s facing the street and he’s shot so many times, “black lives matter,” “I can’t breathe,” “hands in the air,” whenever there is a death we realize that black lives matter. But I’m suggesting to you that what is happening is that there are lives that are being lost that are dying on the installment plan. What we’re doing as a community is we’re also killing our boys but we’re doing it slowly. We’re doing it very deliberately. What we’re doing is we’re allowing the TV to babysit, we’re allowing the music to infuse their mind in such a way that they feel that they can live the words that are being rapped about. They now have idols that actually have six and seven and eight figure accounts but now they realize that they don’t even have four digit accounts. We have grown men that will play video games in their basement. What are we doing? How are we doing this?”

Justice McLeod suggested that parents go back to the basics of reprimanding their kids, like his mother did to him, instead of having them become their friends.

“I’m suggesting that it’s time for us to be vigilant, hyper-vigilant, that we shouldn’t just wait for “hands in the air,” for people to be robbed and for people to sort of be found dead in the street – that in order for us to make sure that our kids actually survive, we must put in the work, as kids, as children, as friends, as family, as aunts, as uncles.”

The Ontario judge founded and chairs 100 Strong, an initiative to fund a summer school program for 12 and 13 year old black boys, and co-chairs Stand-up, a mentorship program for Grades 7 and 8 boys.

“We have to be actually vigilant in what they watch, in the things that they do, we have to do our best to make sure that Black History Month is not just lived out in the 29 days but its actually lived out in the whole year so that our kids will realize that what we expect is that they stand head and shoulders above everybody else,” he said. 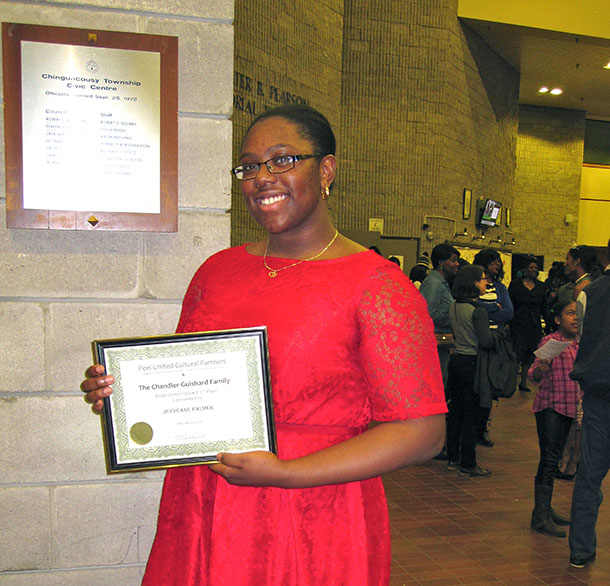 The Black History Recognition Award was presented to Madeline Edwards, vice president of the Mississauga Chapter, Congress of Black Women of Canada.

James Inniss was the first place winner of the Black History Essay Award, however, he was unable to attend but second place winner, 14-year-old Jeydeane Palmer, was present.

Palmer, a Grade 9 student at Humberview Secondary School who wants to become a medical doctor, said her essay was about how black people have come so far and “how they’ve made history and how they’ve changed history.”

“Black History isn’t just about all the bad times we’ve been through. It is about integrity, leadership, and determination. It is about showing your true character…it’s about the accomplishments that black people have made in the past, present and future. My hope is one day to become a role model for the upcoming generation,” writes Palmer in her essay.

The evening included dance, spoken word and musical performances and was emceed by educator, Luther Brown.