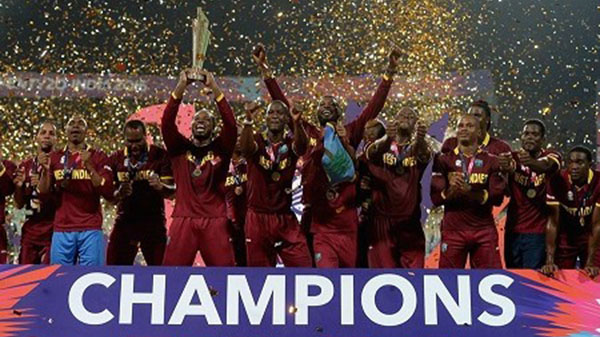 KOLKATA, India, April 3, 2016 (CMC) – West Indies stunned England by four wickets in the men’s final here, on Sunday, as the Caribbean made a clean sweep of the titles at the Twenty20 World Cup.

Carlos Brathwaite belted four astonishing sixes off the first four deliveries of the final over to catapult West Indies to an extraordinary victory, as the men became the first side to win the competition twice, following their maiden triumph in 2012.

With the Caribbean side requiring 19 from the final over in pursuit of 156 for victory at Eden Gardens, the right-handed Brathwaite four times cleared the ropes with seamer Ben Stokes, to hand West Indies a spectacular victory with two balls to spare.

Brathwaite finished on 34 not out from just 10 deliveries, but it was veteran right-hander Marlon Samuels, who stroked an unbeaten 85 from 66 balls, who was the architect of the victory. 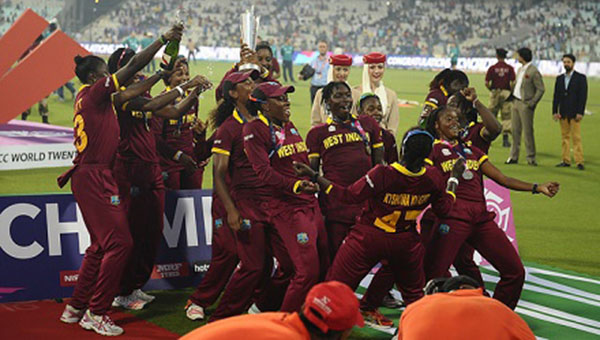 Set 149 for victory at Eden Gardens, West Indies Women reached their target with three balls to spare, with Matthews top-scoring with 66 and Taylor getting 59.

The pair put on a magnificent 120 for the first wicket to take Australia Women out of the contest, and even when Matthews fell in the 16th over, Deandra Dottin (18 not out) joined Taylor to add 24 for the second wicket and see the Caribbean side home.

Matthews, who struck six fours and three sixes off 45 balls, was voted Player-of-the-Match for her innings.

Taylor, who finished with 246 runs in the tournament, was adjudged Player-of-the-Tournament.

Earlier, Australia Women captain Meg Lanning and Elyse Villani both struck 52 to get the three-time defending champions up to 148 for five off their 20 overs, after opting to bat first.

Alyssa Healy fell cheaply for four at 15 for one in the second over but Lanning and Villani put on 77 for the second wicket to rally the innings.

West Indies Women had previously gone out of the tournament at the semi-final stage for the last three editions.