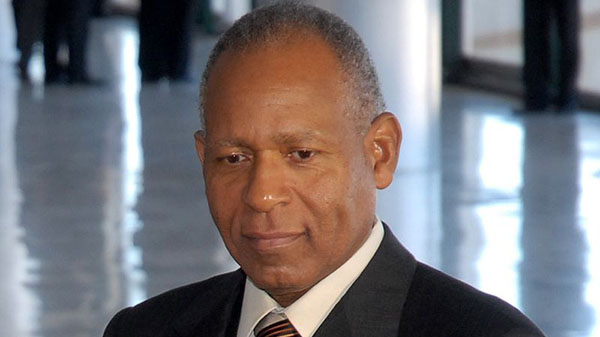 PORT OF SPAIN, Trinidad and Tobago, July 4, (CMC) – Prime Minister, Dr. Keith Rowley, 0n Saturday, led the tributes to Trinidad and Tobago’s fourth prime minister, Patrick Augustus Mervyn Manning, who died less than 24 hours after he had been diagnosed with acute myeloid leukemia. He was 69.

Manning, who up until September 2015, was the longest serving legislator here, died, last Saturday, at the San Fernando General Hospital, where he had been taken earlier this week, at 8.15 am (local time), surrounded by his family,.

His wife, Hazel, said that her husband had been breathing, in the final hours of his life, with the aid of a machine and that he had also been suffering from an infection in the right lung.

“I know I am dying,” she quoted him as having told the medical officials on Friday night, after he had been informed that his condition was deteriorating and efforts were being made to sedate him.

She said among regional leaders, who have already indicated their willingness to attend the state funeral, was St. Vincent and the Grenadines Prime Minister, Dr. Ralph Gonsalves, who, earlier last week, had paid a visit to the hospital “to see his friend”.

She said Manning, on that occasion, was “doing well” and he joked and laughed a lot with Gonsalves.

“I am stunned, I am shocked,” said Prime Minister Rowley, adding that Manning, who served as prime minister on two occasions, “dedicated his life to public service.

“I think we will all acknowledge that the country is poorer for his passing and whatever he represented, whatever he accomplished, the most important thing that he did, is his life to public service,” he said, noting “history will absolve him”.

Rowley said that even though the country was aware of Manning’s illness “we are absolutely shocked to receive the news of his passing”.

He said the former prime minister will be afforded a state funeral “and we, at the level of the Prime Minister’s Office, are making arrangements to make sure that Mr. Manning has a funeral that is worthy of his station in the country, not only as the leader of the PNM (People’s National Movement) …but as a citizen of Trinidad and Tobago who has passed on, leaving us much better than when he started off”.

Rowley said that Manning will be remembered as a visionary, a patriot and a Caribbean man, who always strived for excellence.

“He made the development and well-being of Trinidad and Tobago his priority and, in so doing, dedicated his life to serving our twin-island state.

“During Mr. Manning’s tenure as prime minister, the country experienced unprecedented growth and development, the benefits from that period are still helping us through the trying times we face today.

“Up until his death, Mr. Manning remained a source of guidance and inspiration to a generation of national and regional leaders who still sought his counsel, even after he left active public life,” he added.

Opposition Leader, Kamla Persad Bissessar, said that Manning, who served for nearly 40 years as the parliamentary representative of San Fernando East, was “also one of the longest serving public servants in the region.

“Indeed, his wife, Hazel, has always exemplified strength and fortitude in her family, something which was clear throughout their public life. The grief we share at his passing is, without doubt, grief that will be shared by our fellow nations in the region,” she said, adding “we wish the Mannings God’s guidance and support, and pray that the former prime minister will find a place of joy and rest.” 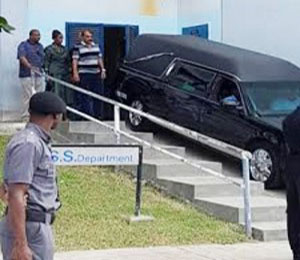 A hearse takes away the body of former T&T Prime Minister, Patrick Manning.

The Ministry of National Security has ordered that flags at all state and non-state agencies and all Trinidad and Tobago diplomatic missions abroad, are “to be flown at half-mast”.

“Former PM, Patrick Manning, one of its true champions has fallen. His contribution to the region in health and security will not be forgotten,” he said.

“Honourable Manning was a sincere advocate for regional integration. As a young man, I was very fortunate to have worked with him,” Skerrit said.

He recalled the former Trinidad and Tobago leader flying into Grenada, by helicopter in 2004, a day after Hurricane Ivan ravaged the island.

“We will miss this most benevolent gentleman, a visionary leader, and true friend,” said Mitchell, who is due to arrive in Trinidad and Tobago on Saturday.

Guyana’s President, David Granger, said that “Manning’s legacy will undoubtedly seat him among the distinguished leaders who served Trinidad and Tobago, selflessly, and with an immense sense of patriotic pride and solemn dignity”.

“Mr. Manning will further be remembered as a leader and politician who was well liked, even across the political divide, and as a man possessed of a deeply spiritual soul. In this regard, he leaves a poignant legacy as an exemplar for politicians, leaders and servants of the people throughout our Caribbean region and further afield.

“The people and nation of Trinidad and Tobago, and indeed the wider Caribbean region, are richer for having benefitted from the service of Mr. Manning who served twice as Prime Minister,” Granger said in a statement.

Barbados Opposition Leader, Mia Mottley, tweeted that she was “deeply saddened” recalling that Manning was “always a gentleman, he believed in our region” and that the two worked closely from 2005 to 2007.

“He was a good leader for his country and his party, and he was really a genuine Caribbean man. He believed in the ideals and the necessity and importance of us, as (Caribbean) people, to be able to come together and really and truly create the Caribbean civilization,” Spencer said.

Spencer, who paid a visit to Manning in Trinidad, a few weeks ago, said that despite his condition and physical limitations, Manning still shared his optimism for Caribbean unity.

“He was still very much onto the whole question of the Caribbean people coming together, and he was still hopeful that the ultimate objectives, with respect to genuine Caribbean unity, will be achieved and he felt that Trinidad and Tobago had a pivotal role to play in that regard,” Spencer added.

The Trinidad-based Caribbean Court of Justice (CCJ) said that it was extending “condolences to the family of one of our region’s greatest leaders”.

A geologist by training, he became the leader of the PNM from 1987 until he lost the general election in 2010.

Manning served as Member of Parliament for the San Fernando East constituency from 1971 until 2010 when he decided against contesting the general election.

Manning was one of three PNM legislators that survived the 33-3 routing that the PNM received from the hands of the National Alliance for Reconstruction (NAR), an amalgam of political parties that defeated the PNM after 30 years of unbroken rule in 1986.

He will also be remembered for calling two general elections ahead of the constitutional deadline, including the 2010 poll that brought the People’s Partnership government, headed by Persad Bissessar, to office.

Prime Minister Rowley told the nation, especially “those who might think that people in public life are worth nothing”, that Manning should be remembered for the various policies and programs he put in place during his tenure of office.

In Toronto, the Consulate General of the Republic of Trinidad and Tobago announced that a book of condolences, in honour of the late prime minister, will be opened today, at the consulate office, from 9AM to 4PM, until the day before his funeral. It also announced that the T&T flag will be flown at half-mast, until the day of the funeral.