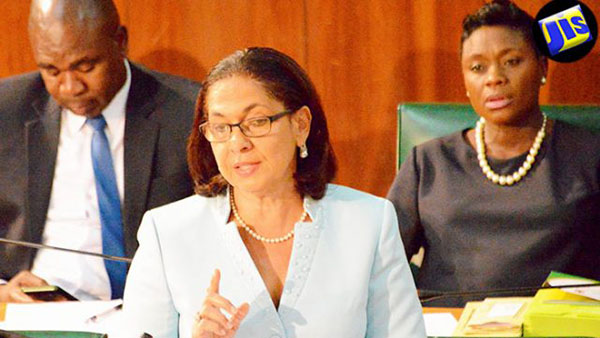 Minister of Labour and Social Security, Hon. Shahine Robinson, makes her contribution to the 2016/17 Sectoral Debate in the House of Representatives on June 28. In the background are Members of Parliament, Zavia Mayne (left) and Juliet Cuthbert-Flynn. Photo credit: Rudranath Fraser/JIS.

Thousands Of Jamaicans Employed Under Canada And US Overseas Program

KINGSTON, Jamaica, June 28, (CMC) – Approximately 15,000 Jamaicans have been employed in Canada and the United States, under the Overseas Employment Program, during the fiscal year 2015-16, Jamaica’s Labour and Social Security Minister, Shahine Robinson, has said.

She told legislators, during her contribution to the 2016/17 Sectoral Debate yesterday, that for this year, emphasis will be placed on strengthening, expanding and diversifying the range of job opportunities, with a goal of placing 16,000 Jamaican workers in the North American market by the end of the 2017 season.

She said Canadian authorities, in 2014, restricted the entry of foreign workers into certain low-skill occupations, but noted that recent reports suggest that this situation is likely to change in the very near future as Canada, in response to critical labour shortages, is contemplating relaxing some of these restrictions.

“The prospects and placements in the United States are also trending upwards, as this market continues to rebound. The growing demand for Jamaican workers in both the agricultural and hospitality sectors resulted in increases of 5.8 per cent and three per cent, respectively, in 2015,” Robinson said.

“The Ministry is of the firm view that there is further scope for expansion in the United States. It is in this context that plans are afoot for me to meet with major employer groups, both in the US and Canada, in the coming weeks to promote the program and the quality of our workers with a view to securing more jobs,” she added.

Meanwhile, Robinson, said she will take a submission to Cabinet for the mandatory use of the Labour Market Information System (LMIS) to advertise all job vacancies in the public sector.

“When all public bodies use the system at any point in time, the government will be able to know all vacancies in the public sector. I wish to use this medium to encourage employers in the private sector to register and use the system, which is free.”

She noted that the Labour Ministry is moving to position the LMIS as the national portal for labour market intelligence and information to guide decisions by the various stakeholders who access the service.

Robinson said that the country’s current unemployment rate, which has averaged over 13 per cent in the last five years, is in part, a result of skills mismatch with attendant oversupply and undersupply in certain sectors.

“The Ministry is working to close these gaps through provision of germane and up-to-date labour market intelligence and career development services,” she said.

Under the Inter-American Development Bank’s Integrated Social Protection and Labour (ISPL) Project, the functional capacity of the Labour Market Information System and Electronic Labour Exchange has been improved.

“It is expected that this positive trend will continue,” Robinson told legislators.