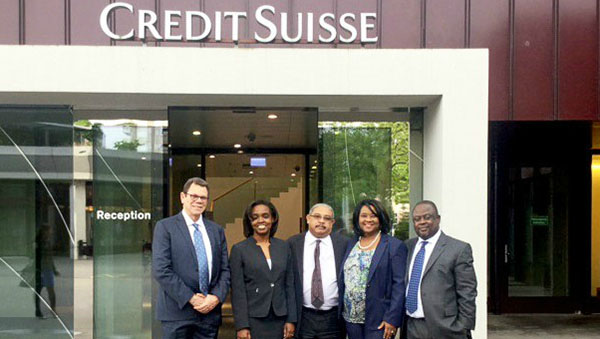 The CDB said the 12-year CHF145 million bond offering carries the lowest coupon rate, 0.297 percent, achieved by an international public sector issuer for this tenor, in the CHF market.

The offering also marks the first time that a borrower from the Caribbean region has accessed the CHF market successfully.

The bank revealed that the bond offering was launched last month and was facilitated by the global private bank and wealth manager, Credit Suisse, which acted as sole book-runner on the transaction.

“The decision to enter into the Swiss market allows CDB the opportunity to diversify its investor base away from traditional sources,” said CDB President, Dr. Warren Smith.

“The bond offering was oversubscribed in a very short period of time, demonstrating that there is strong investor confidence in CDB, even in light of the less than optimal market conditions, including volatility due to Brexit concerns,” he added.

The CDB said that the bond offering followed meetings in Geneva and Zurich between investors and a delegation of senior CDB officials.

“Investor feedback was positive, allowing for the execution of the transaction, immediately afterwards. Due to the strong interest shown, the order book was three times oversubscribed in 15 minutes. The final coupon rate of 0.297 per cent was the lowest ever in CHF by an international public sector issuer in a maturity longer than 10 years,” the CDB said.

“With over 60 accounts participating, the investor base was dominated by asset managers and banks, with the rest of the trade going to pension funds and insurance companies. The successful issue in the Swiss CHF market was attributable to the inherent strength of the Bank, which is reflected in its strong public rating,” it added

CDB said that its most recent bond issue was in 2012, when the bank raised US$300 million through the placement of a 15-year bond in the US capital markets.