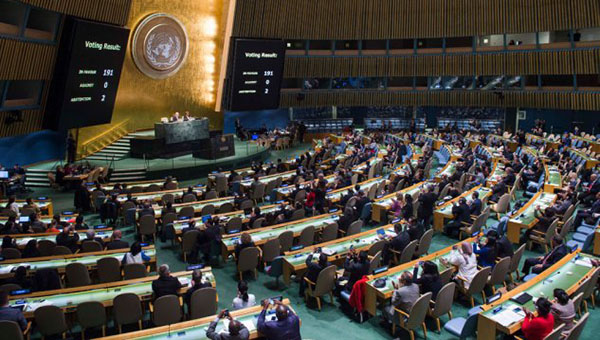 Wide view of the General Assembly meeting to consider the necessity of ending the economic, commercial and financial embargo imposed by the United States of America against Cuba. UN Photo/Amanda Voisard

US Abstains On Resolution To End Trade Embargo Against Cuba

UNITED NATIONS, New York October 26, 2016 (CMC) – The United States, today, abstained from a United Nations General Assembly (UNGA) vote on a resolution calling for an end to the decade’s old trade embargo it has imposed on Cuba, a move being regarded as an improvement in relations between the two countries.

“Abstaining on this resolution does not mean that the United States agrees with all of the policies and practices of the Cuban government. We do not,” U.S. Ambassador to the United Nations, Samantha Power, told the UNGA.

Washington has, over the past 24 years, consistently voted against the resolution and for the 25th consecutive time, the UNGA adopted the resolution with 191 votes in favour.

Israel, which has always supported the United States’ position in the past years and opposed the resolution last year, also abstained today.

While the resolutions are non-binding, political observers say they do carry political weight.

Washington and Havana began warming their relations in 2014, but the Republican-led Congress has rebuffed calls from US President Barick Obama to lift the more than 50-year-old trade and economic embargo that Havana said has cost it billions of dollars.

The UNGA applauded when U.S. Ambassador to the United Nations, Samantha Power, announced, prior to the vote, that the United States would abstain, even as she noted that “we are profoundly concerned by the serious human rights violations that the Cuban government continues to commit with impunity against its own people”.

Cuba’s Foreign Minister, Bruno Rodriguez, described the abstention as a “positive step for the future of improving relations between the United States and Cuba.

Rodriguez said in September that damage from U.S. sanctions between April 2015 and March 2016 amounted to $4.6 billion and to US$125.9 billion since the embargo’s inception more than 50 years ago.

In March, Obama made the first visit to Havana by a U.S. president in 88 years.

The U.N. resolution adopted today takes note of the steps taken by Obama as positive but “still limited in scope” and urges the United States to repeal or invalidate the embargo on Cuba as soon as possible.