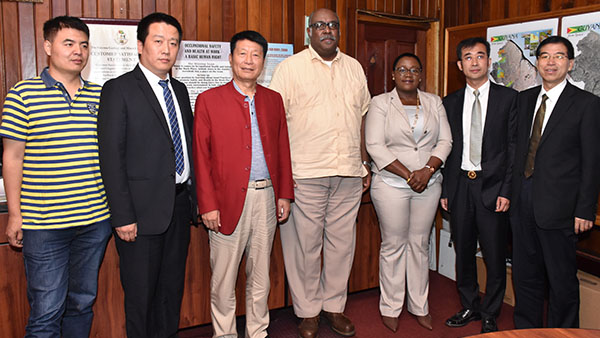 Minister within the Ministry of Natural Resources, Simona Broomes (third from right) and Acting Commissioner of the Guyana Geology and Mines Commission (GGMC), Newell Dennison (centre) pose with the delegation of Chinese businessmen.

GEORGETOWN, Guyana, June 8, 2017 (CMC) – A Chinese business delegation has expressed interest in investing in Guyana’s natural resources, after holding talks with the Minister within the Ministry of Natural Resources, Simona Broomes, and a team from the Guyana Geology and Mines Commission (GGMC).

A statement, issued following the talks, noted that the delegation had expressed interest, primarily, in gold and diamond mining.

“They are also interested in bauxite mining, lithium and other lesser known minerals,” the statement added.

It quoted the head of the delegation, Simei Liu, as indicating that China has the market for Guyana’s “rich” natural resources.

“A lot of Chinese want to come here to help Guyana, to invest here, whatever they can get the benefit from Guyana through the investment,” Liu said.

The statement said that the meeting, yesterday, stemmed from discussions between Broomes and Chinese investors, during a conference in China, last September.

We had some lengthy meetings and discussions about Guyana. They had their concerns about what they heard about coming to Guyana, and all of that, and I think they managed to get some clarity,” Broomes explained.

Since then, investors have sent teams to scout investment opportunities in Guyana. Liu explained that the results of fact finding explorations have been favourable.

Lui pointed out that investors’ confidence has increased after meeting with current Chinese investors, locally. Guyana currently has Chinese investors in its restaurant, hardware, clothing, construction, forestry and mining sectors.

“The delegation believes that these investment opportunities can also lead to strengthened relations between Guyana and China. Guyana established diplomatic relations with China on June 27, 1972, the first English-speaking country in the Caribbean country to do so,” the statement said.