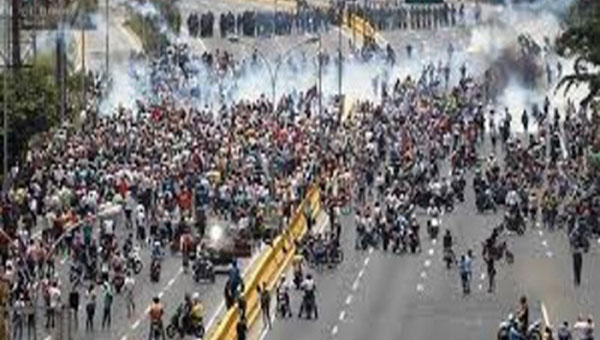 No official statement has been issued by the Guyana-based CARICOM Secretariat or from the office of the Grenada Prime Minister, Dr. Keith Mitchell, who is the CARICOM chairman and who is reported to have convened the special emergency meeting, by video conference.

However, the Trinidad and Tobago Ministry of Foreign Affairs, in a brief statement today, said that the leaders, who had participated in the video conference call, had engaged in “varied and robust views”, and that the meeting “centered on promoting dialogue among stakeholders within Venezuela, geared towards resolution of the political and social challenges in that country”.

CARICOM leaders, at their last summit, held in Grenada last month, issued a statement reaffirming their guiding principles of adherence to the rule of law, respect for human rights and democracy, as well as for the fundamental principles of non-intervention and non-interference in the internal affairs of states.

But they noted that they were concerned about the “difficult political, economic and social situation in Venezuela, in particular, the increase in violence and polarization between the Government and the Opposition, and its effect on the people of Venezuela”.

As a result, the regional leaders “called for all parties to commit to engage in renewed dialogue and negotiation, leading to a comprehensive political agreement, with established time tables, concrete actions and guarantees to ensure its implementation for the well-being of the nation”.

“In this regard, CARICOM Heads of Government offered their good offices to facilitate this dialogue,” the communiqué said, noting that they had also mandated Mitchell “to communicate with the parties concerned in Venezuela about this offer”.

While there has been no public acceptance of the CARICOM offer from the opposition, Venezuelan President, Nicholas Maduro, in a July 7 letter to Mitchell, said “he, wholeheartedly, welcomes the valuable proposal contained in that communiqué, offering the good offices of CARICOM to reactivate an agenda of constructive dialogue among the political parties of (our) country”.

Opposition forces in Venezuela have been staging street demonstrations in a bid to force the Maduro government out of office and, in his letter, the embattled Venezuelan leader had proposed a ‘working meeting” in Venezuela on either July 11 or 12 to discuss the situation.

On July 30, Venezuela staged an election to choose a 545-member constituent assembly, with the power to rewrite the constitution and dissolve state institutions.

The polls were boycotted by the opposition and criticised by many western countries, but Maduro said the assembly would help bring peace to the country, where more than 100 people have been killed and more than 2,000 wounded since the street protest began in April.