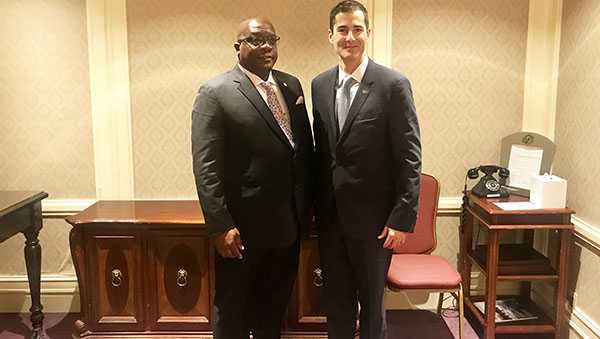 St. Kitts-Nevis Prime Minister, Dr. Timothy Harris, one of the speakers at the Toronto Global Forum, yesterday, met with Nicholas Rémillard, the President and Chief Executive Officer of the International Economic Forum of the Americas (IEFA), the umbrella organisation that convenes the Forum.

TORONTO, Ontario, November 1, 2017 – At the Toronto Global Forum, an international conference fostering dialogue on national and global issues, the Prime Minister of the Federation of St. Kitts and Nevis, Dr. Timothy Harris, gave a noteworthy speech, in which he issued an impassioned plea on behalf of Caribbean small island states.

Prime Minister Harris’ stirring appeal was delivered yesterday, while addressing the Toronto Global Forum — which is occuring from October 30 to November 1 — during his task of introducing the session, entitled “Paving the Way for Climate-Resilient Infrastructure”.

The Toronto Global Forum is held under the auspices of the International Economic Forum of the Americas (IEFA), which organizes annual summits, bringing together heads of states, central bank governors, ministers and global economic decision makers.

Dr. Harris, who was invited to speak and share his country’s perspective at the prestigious gathering of political and business leaders, focused his remarks on the vulnerability of the Caribbean region and the need to invest in climate-resilient infrastructure, in light of the devastation caused by Category 5 Hurricanes, Irma and Maria.

In his introductory remarks that set the parameters for the ensuing panel discussion, he highlighted the need for International Financial Institutions (IFIs) and the Development Assistance Committee (DAC) of the Organisation for Economic Co-operation and Development (OECD) to reconsider the role of GDP per capita measurements in development finance and policy. 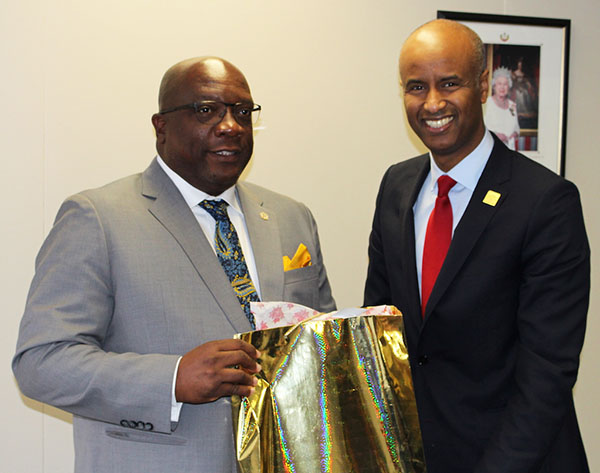 Prime Minister Harris stated that while the Caribbean is a minimal contributor to climate change by way of carbon emissions, its islands like other Small Island Developing States (SIDS) of the world  are being disproportionately impacted by it. Dr. Harris further stated that, “In the true spirit of Caribbean resilience, rather than cling to the crutch of victimhood, we hope to seize this opportunity to continue our transition to a green economy anchored on climate-resilient infrastructure.  While we may not be able to guard with certainty against every wail of the wind and every lash of a rising sea, there are tools at our disposal to mitigate and adapt.”

Following Prime Minister Harris’ engaging presentation before the high-powered gathering, he met with Nicholas Rémillard, the President and Chief Executive Officer of the IEFA. Both men discussed a range of issues, including airlift from Canada to St. Kitts and Nevis, tourism and entrepreneurship.

They also discussed opportunities for the Prime Minister to meet with top Canadian investors, and Dr. Harris used the occasion to invite Rémillard to visit St. Kitts and Nevis to pursue further avenues for partnership.