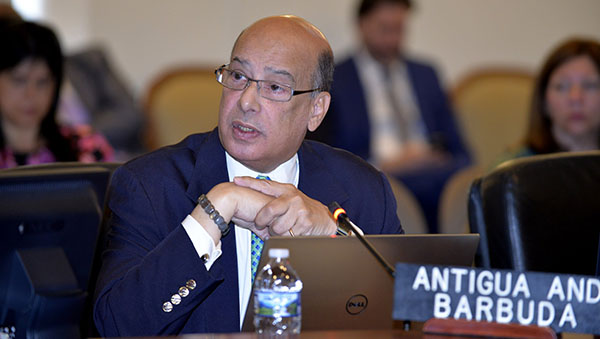 Sir Ronald Sanders is Antigua and Barbuda’s Ambassador to the United States and the Organisation of American States (OAS).

Antigua and Barbuda’s Ambassador to the United States and the Organisation of American States (OAS), Sir Ronald Sanders, said, in a statement, the inappropriate depiction of the countries is a matter that the people of the United States of America and their government and Congress should contemplate seriously.

“The responses have been swift, showing a mixture of outrage and shock,” he said.

According to Sanders, “the comment has done nothing but injure the relations between the United States and many countries. Hopefully, representatives of the U.S. in other countries will distance themselves from it, and apologise as discreetly as they can”.

Sanders said he is particularly concerned about the remark and the impact on the French-speaking Caribbean Community (CARICOM) nation of Haiti.

“My colleague, the Ambassador of Haiti to the United States, Paul Altidor, rightly said, ‘We feel, in the statements, if they were made, the president was either misinformed or mis-educated about Haiti and its people’”.

Sanders noted that the United Nations spokesman, Rupert Colville, described the remarks as “racist”, adding that, “You cannot dismiss entire countries and continents as ‘shitholes,’ whose entire populations, who are not white, are therefore not welcome.”

The diplomat pointed out that for the Caribbean, Haiti “is more than just a member of our community, it is the first nation to rise up against slavery and oppression in our region.

The Antigua and Barbuda diplomat continued, “Importantly when the Republic of Haiti was established on January 1, 1804, it was the first free nation of free black people to rise in a world of empires of Western European nations,” adding that Haiti has paid a very high price for its assertion that black people were born free, entitled to freedom and the right to fight for it.

“In a real sense, from the moment of that assertion of freedom, Haiti was earmarked for the “shithole” status now applied to it. It was punished by every European nation, particularly France, and successive governments of the United States aided and abetted in the process.”

Sanders urged all Caribbean nationals to make their voices heard and to stand up for Haiti, with pride and gratitude.

“Every Caribbean person, at all levels, should make it, abundantly and crystal clear, that we resent this depiction of Haiti; we call for acknowledgement by all who have exploited it and kept it in poverty; and we urge that, instead of dismissing it in unfortunate language, they implement programs to atone for their part in its pauperisation,” he offered.

Its reported that the US President made the remarks, during a discussion of an emerging bipartisan deal to give legal status to Caribbean and other immigrants, illegally brought to the United States as children.

When Trump heard that Haitians were among those who would benefit from the proposed deal, he asked whether they could be left out of the plan, asking, “Why do we want people from Haiti here?”

However, Trump, in a tweet on Friday, denied making such comments.

“Never said anything derogatory about Haitians other than Haiti is, obviously, a very poor and troubled country. Never said “take them out.” Made up by Dems (Democrats). I have a wonderful relationship with Haitians. Probably should record future meetings – unfortunately, no trust,” the President said.