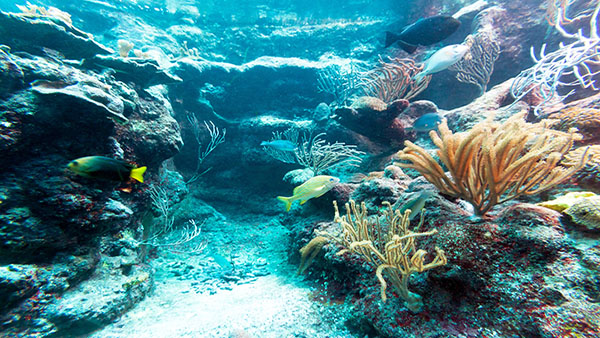 VANCOUVER, British Columbia March 19, 2018 (CMC) – New research by the Institute for the Oceans and Fisheries (IOF) at the University of British Columbia, Vancouver, finds that larger reef areas may help protect the Caribbean’s coral reef fish communities from the impacts of ocean warming.

The research was funded by the Natural Sciences and Engineering Research Council of Canada.

The study, “Regional variability in the sensitivity of Caribbean reef fish assemblages to ocean warming” was published in Marine Ecology Progress Series, a peer-reviewed scientific journal that covers a wide array of marine ecology.

“We are seeing alterations to local reef fish populations due to warming ocean temperatures, particularly in those Caribbean countries that are closer to the equator, like Trinidad and Tobago, where commercially important fishes, such as Cero and Northern red snapper, are on the decline already,” said Ravi Maharaj, first author and IOF’s Ph. D candidate, in a statement.

IOF said the study looked at the size of reefs in the exclusive economic zones (EEZ) – estimated from satellite imagery – of nine Caribbean countries and assessed the impact of rising ocean temperatures on the fish that are most important to the local fisheries.

The EEZs of the Caribbean countries reviewed were The Bahamas, Belize, Grenada, Haiti, Jamaica, Montserrat, St. Vincent and the Grenadines, Trinidad and Tobago and Venezuela.

It said the researchers examined how reef size may moderate the impacts of rising ocean temperatures.

Using sea water temperature and fisheries records going back to the 1970s, researchers found that the Caribbean Sea is warming, and fish that like cooler temperatures were decreasing in dominance in the catch, IOF said.

Using findings from the study, the researchers predict that changes in fish community can be reduced by 30 to 80 percent with a doubling of reef area, IOF said.

It pointed out that this underscores the potential effectiveness of interventions that may maintain and restore reef habitats to reduce climate impacts on fish communities.

“With a small degree of warming, some fish may be able to acclimate, but they need suitable habitat to grow and thrive,” Maharaj said. “More refuge can be found in bigger reefs.”

“However, with the addition of habitat loss due to pollution, coral bleaching, damage from the storms that frequent the area, as well as unmanaged fishing pressures, such fish refuge, is becoming rarer,” he added.

IOF said most of the fisheries along the many coral reefs in the Caribbean are small-scale and subsistence-based, providing one of the main sources of food and employment.

But IOF said the fisheries are currently unmanaged.

The researchers, therefore, urged that policy makers focus attention on habitat protection and fisheries management in the area.

“There is a dire need for effective fisheries and conservation measures mechanisms in the Caribbean region, as the interactions between climate impacts and unmanaged fisheries are likely to weaken the resilience of fish populations,” said senior author, William Cheung, IOF associate professor.

“Our results show that increasing the resilience of fish populations to climate impacts will involve managing for the broader ecosystem, particularly through protection and restoration of critical fish habitats,” he added.