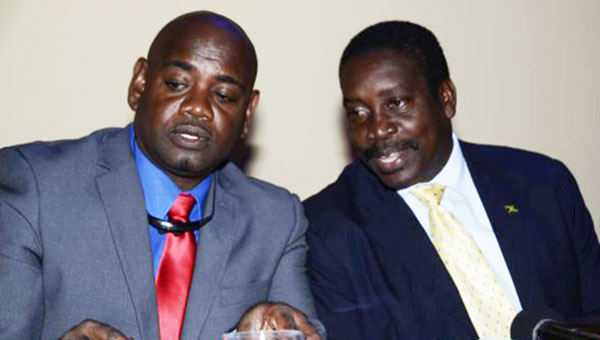 Minister of National Security, Robert Montague, right, in discussion with Chairman of the Jamaica Police Federation, Sergeant Raymond Wilson, at the Federation's 73rd Annual Joint Central Conferences at the Hilton Rose Hall and Spa, in St. James on May 11. Photo credit: Garwin Davis/JIS.

ST. JAMES, Jamaica May 12 (JIS) — Minister of National Security, Hon. Robert Montague, says the selfish and unethical actions of a few members will not be allowed to undermine the hard work of the honest and dedicated men and women of the Jamaica Constabulary Force (JCF).

Addressing the Jamaica Police Federation’s 73rd Annual Joint Central Conferences at the Hilton Rose Hall Resort and Spa, in St. James on May 11, Mr. Montague emphasized that there is no place in the JCF for those who are guilty of accepting or soliciting bribes, and taking part in other corrupt practices.

“The Police Force is a reflection of the society, which in itself suffers from many of the issues that exist. We cannot ignore these manifestations or bury our heads in the sand and hope that things will get better,” the Minister said.

“The presence of corruption is like a cancer eating out the very heart of the JCF. These individuals who have been undermining the efforts of others must be identified, punished and separated from the Force,” he added.

Mr. Montague said that members of the public who encourage and facilitate corrupt practices are as guilty as the offending officers, and their actions must be equally condemned and punished.

“Corruption is not only taking a bribe, or looking the other way, it’s also not promoting people who deserve it. It is being involved in lotto scamming and removing the registration tag off service vehicles and using it on your own. Corruption is running your own illegal taxi, while pressuring licensed taxi operators,” the Minister noted.

Mr. Montague also cited corruption as falsifying claims, using the service vehicles as private vehicles and not serving a warrant on your ‘squaddie’,  even though he  reports for duty every day.

“The fight against corruption must be fulsome, total and unrelenting,” Mr. Montague said.

He pointed out that under his watch, it will not be business as usual and that the Government will be insisting on a promotion policy within the JCF that is based on performance, merit and qualifications.