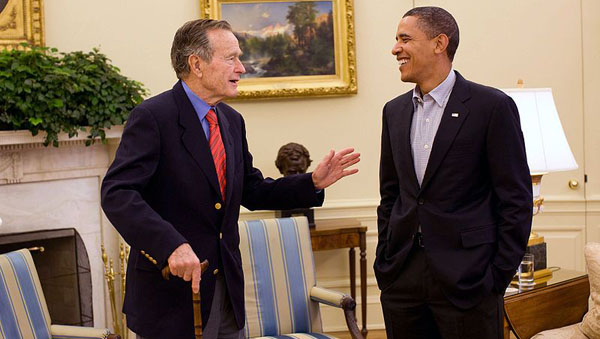 Prime Minister of Barbados, Mia Mottley, in her statement, said President Bush will be remembered for utilizing his diplomatic skills and his position as a world leader, who presided over the dismantling of the Cold War.

“It is with a sense of regret that we, in Barbados, note the passing of the 41st president of the United States….Mr. Bush, who served, with distinction, as an aviator in World War 11, lived a long and fruitful life that was exemplified by service to his country, serving as a Congressman, Diplomat, Intelligence Head and as Vice President, under President Ronald Reagan, before ascending to his country’s highest office.

“The government and people of Barbados extend deepest condolences to the people of the United States of America and to his family. May he rest in peace,” Mottley said.

For his part, Jamaica’s Prime Minister, Andrew Holness, said George H.W. Bush was a friend to Jamaica and the Caribbean, adding that the 41st. president was a man of strength and a believer in the building of democratic institutions.

“He oversaw the ending of the Cold War, which was an extremely significant time in world history, taking the world from the edge of nuclear destruction to an era of relative stability in that regard, and fundamentally changing global dynamics,” he said.

Holness, who was speaking from the G20 Summit in Buenos Aires Argentina, recalled former President Bush as a true servant of the people.

“Jamaica and the Caribbean have lost a friend. During his tenure as the 41st. President of the United States, former President Bush was kind to us, as neighbours, in the wider region. Indeed, he also played a pivotal role in global diplomacy,” continued Holness.

Former President Bush served as president of the United States of America, from 1989 to 1993.

A state funeral for Bush was held, today, at the Washington National Cathedral, after which his body is being flown back to Texas, where it will lie in repose at the St. Martin’s Episcopal Church, overnight, until 7 a.m. tomorrow.