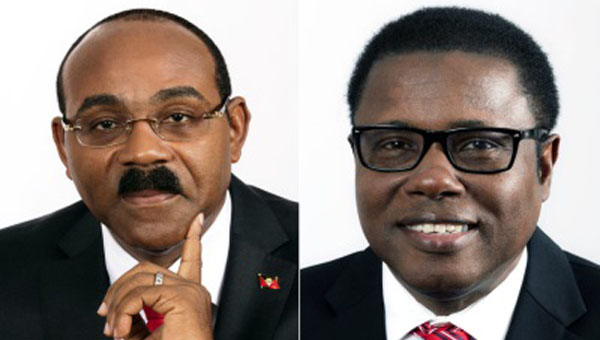 ST. JOHN’S, Antigua and Barbuda, January 20, 2020 (CMC) – Prime Minister, Gaston Browne, announced, today, he had dismissed his Agriculture Minister, Dean Jonas, after indicating that he had, for more than six months, sought to dissuade the former cabinet minister “from taking decisions that are inimical to good governance”.

Browne wrote to Governor General, Rodney Williams, today, advising him “to terminate the duties and responsibilities” of Jonas, with immediate effect.

The move followed a meeting, earlier today, between Prime Minister Browne and several workers from the Ministry of Agriculture.

In a separate letter to the former minister, Browne informed the parliamentary representative of St. George’s constituency, that “for more than six months, I have tried to dissuade you from taking decisions that are inimical to good governance, and to my government’s policy”.

“My attempts have been in vain. Your relationship with your staff in the Ministry is toxic, and a continuous decline is evident from the reports that have reached me. The relationship with the farmers is also toxic and deteriorating further,” Browne wrote.

He said on the basis of the inabilities of the former minister “to develop a good working relationship with his staff and with farmers, it has become necessary to provide the representative with a six-month period for reflection and contemplation, as to how to achieve reconciliation”.

A statement from the Office of the Prime Minister said under Section 71(1) of the Antigua and Barbuda Constitution, Prime Minister Gaston “is authorized to select or to terminate members of Cabinet”.

Last weekend, Browne speaking on a radio program, here, said he was putting Jonas “under public notice that he either shape up or ship out”, following public accusations that Jonas had not met the goals in the ministry, since his appointment, one-and-half-years ago.

But Jones, in a separate interview, told radio listeners that Prime Minister Browne may have taken his position, based on flawed information.

“Well, I think the comment was…totally wrong,” Jonas said, adding that Browne had provided him with data “that clearly was wrong”.

He quoted Prime Minister Browne as saying that the information had been provided by a senior official in the Ministry of Agriculture.

“What I wanted to point out, is that the report card, as suggested by the Prime Minister (based) on the information that he got, was totally flawed, and this is why I can say that his assessment of my performance in the ministry may have been flawed, based on that information …that was totally flawed as well,” Jonas stated.

He said that in his discussions with Prime Minister Browne, over the weekend, “I can say, categorically, without fear of contradiction, that the data he got…was flawed and is wrong. I can say that categorically”.

During his radio interview, Browne told listeners “I had a real stern discussion with the Agriculture Minister…and I told him, you have to step up now.”

“He has said to me that there would have been improvements. I am not necessarily doubting him, but I don’t believe that the objectives that we have set, to increase agriculture significantly, that those objectives have been met fully,” Browne said.