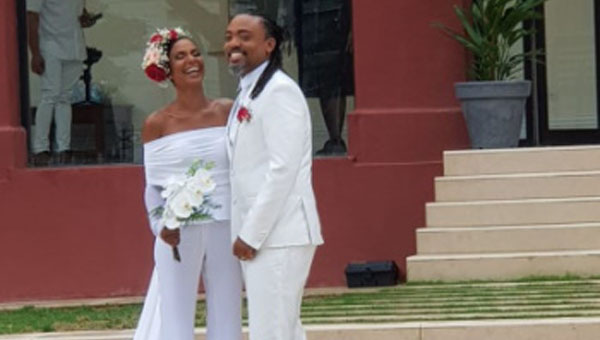 Among those attending the ceremony, officiated by Pastor, Clive Dottin, of the Seventh Day Adventist Church, was Attorney General, Faris Al-Rawi.

Montano, who has had a long list of musical hits, was dressed in a white suit, while his bride wore a white, two-piece — pants and off-the-shoulder top — outfit, with a trail attached. She also wore a colourful, floral hair-piece.

The guests, close friends and relatives of the couple, were also dressed in all white.

Media photographers were not allowed on the compound and the staff at the Parliament building, called “Red House”, lined the balcony on the top floor, with their cameras in hand, to record the event.

Montano will perform at his annual “Machel Monday” show, on Monday, with the theme for the occasion being “The Wedding”.