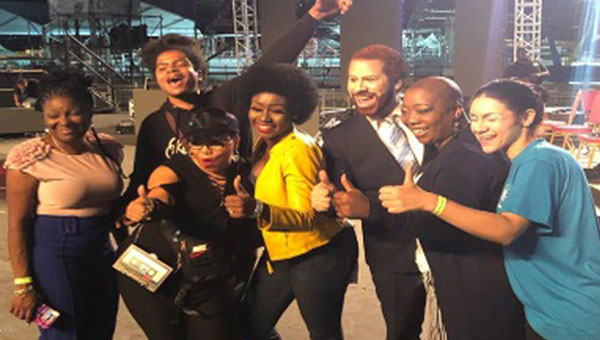 PORT OF SPAIN, Trinidad and Tobago, February 21, 2020 (CMC) – Terri Lyons, who sang on the decision of Britain’s Prince Harry and his wife, Meghan Markle, to leave the Royal Family, has copped the TT$800,000 first prize, as women calypsonians swept the three top spots of the Trinidad and Tobago Calypso Monarch competition, last night.

Lyons, whose tune, “Meghan My Dear”, a social commentary on the decision of Prince Harry to marry Meghan, a Black woman, won the competition ahead of a former monarch, Karene Asche, and Heather McIntosh.

In a competition, in which the calypsonians were asked to perform two songs, for the first time in many years, former monarchs, Duane O’Connor, Dr. Hollis Liverpool (Mighty Chalkdust) and Winston Peters ( Gypsy) placed fifth, sixth and seventh, respectively.

The Calypso Monarch competition is one of three major events, this weekend, as Trinidad and Tobago Carnival celebrations come to an end, next Tuesday, with the traditional street parade and jump up.

Later today, several local and regional singers will participate in the International Soca Monarch competition, with a one million dollar first prize, in the Power Soca section; and a TT$500,000 top prize in the Groovy Section.

Defending Monarch, Grenadian Hollis Mapp, better known by his sobriquet, ‘Mr Killa’, has decided against participating in the competition, after expressing disappointment at the preparations for the show.

“As the reigning Power Soca Monarch King, I was eager to defend my crown, but my declaration was not acknowledged by the officials, staging the competition. Since arriving in Trinidad and Tobago, over a month ago, I have not received any of the courtesies or protocol one would expect to be extended to the current title holder,” he said.

“My team and I have been deprived of the details and tools, necessary for me to properly prepare for my performance. As it is commonly known, I give nothing less than 100 percent for each and every performance, and my team and I have come to the unfortunate conclusion that it will not be possible to do so, in this year’s competition,” he added.

On Saturday, 11 steel-pan bands will perform at the 2020 National Panorama finals, to be held at the Queen’s Park Savannah, on the outskirts of the capital.

At stake are the BP Challenge Trophy and the one million dollar first prize. Defending champion, Renegades Steel Orchestra, is trying for a “three-peat”, and will face competition from former winners, Exodus, Desperadoes and Phase Two Pan Groove.

Police Commissioner, Gary Griffith, has warned revellers to obey the laws, including the ban on glass bottles at fetes.

“I do not want to be seen as the Grim Reaper for Carnival this year. If it is that we adhere to our obligation, and it is really to look after the well-being of the same citizens, we are asking let good sense prevail, adhere to these requirements.

“This is done, worldwide, at other Carnivals, we have just been behind the ball. Thankfully, we are getting it right this year,” Griffith told a news conference, yesterday, assuring patrons that this will be the safest Carnival yet, with joint police and army foot and mobile patrols, as well as roadblocks, planned for the two-day event. Drones will also be used in these operations.

“We intend to do all we can, but the public must work with us. Our job is to make sure we minimise any incidents. There is no need for the country to be fearful, you just need to be careful,” Griffith intoned.