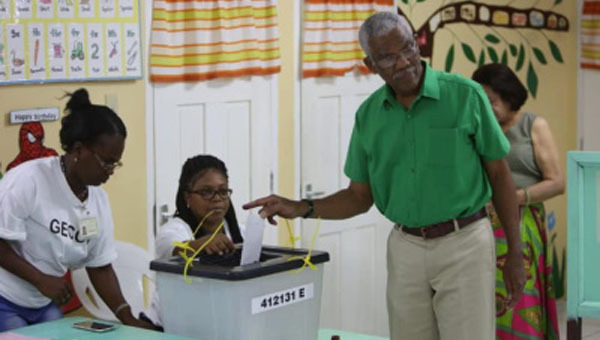 Guyana's President, David Granger, and his wife, Sandra, in the background, cast his ballot in the general election, earlier today.

GEORGETOWN, Guyana, March 2, 2020 (CMC) – President, David Granger, urged voters, today, to exercise their franchise and participate in the democratic process of electing a new government for Guyana, even as he expressed confidence that his coalition administration will be returned to office.

Granger, accompanied by his wife, Sandra, were among persons voting early in the general election, in which the governing coalition — A Partnership for National Unity (APNU) and the Alliance For Change (AFC) — is facing eight other political parties for control of the 65-member National Assembly.

But political observers say the contest will be between the APNU/AFC and the main opposition People’s Progressive Party/Civic (PPP/C), as it had been in 2015, when the APNU/AFC squeezed home, by a slender one-seat majority.

The PPP/C has nominated former Housing Minister, Ifraan Ali, as its Presidential Candidate, to challenge Granger for the Head of State office in the country.

“The voting was without incident,” Granger told reporters, after casting his ballot, and added, “everything went smoothly, the ballot paper had the correct names of the parties and I expect we will have a smooth and successful process”.

He urged Guyanese to go out and vote, saying “first of all, this is not only a democratic right, but a democratic duty of all citizens, to participate in this process, and I would urge persons, who might be a bit tardy, to re-think the prospect of ensuring that they get a government of their choice in Guyana”.

“So I hope people don’t stay away, regardless of their political persuasion. They should come out and express their opinion, in favour of the party of their choice. I am very confident that the party, the coalition, which I lead, will be successful, and I am confident also, of the process, which has been put in place, by the Elections Commission…will be efficient”.

The polls are being monitored by local, regional and international observer teams, and Granger said “Guyana, today, will demonstrate that it is a democratic country and it is capable of conducting elections, efficiently and credibly, in accordance with the laws and the Constitution.”

Granger, who said he plans to spend today, visiting various polling stations, as well as “awaiting the results, in the bosom of the party”, dismissed suggestions that the election was important, given the country’s new-found oil and gas wealth.

“Whether it is oil, or sugar, or rice, all these economic issues have no bearing on the democratic process. I am confident that the Caribbean is looking to Guyana as a beacon of economic development, but it will also be a beacon for democratic rectitude — and that’s my concern,” Granger told reporters.