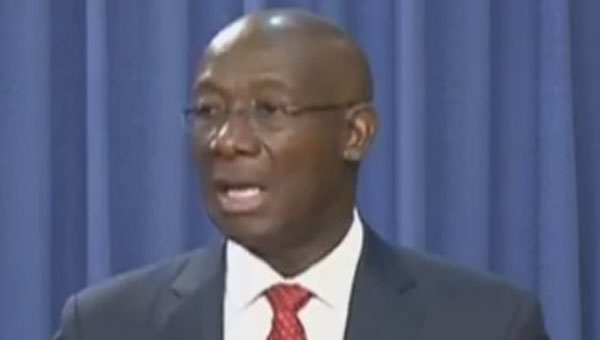 PORT OF SPAIN, Trinidad and Tobago, April 6, 2020 (CMC) – The Trinidad and Tobago government said, today, it would urge the Caribbean Community (CARICOM) to await a request from Guyana, on any new development regarding the disputed March 2 regional and general elections, after the Court of Appeal, last Friday, ruled that the regional grouping had no jurisdiction to supervise the recounting of ballots.

Yesterday, the Guyana Court of Appeal ruled that the Guyana Elections Commission (GECOM) cannot hand over its responsibilities, including the management and supervision of the elections, to any other body.

The Court felt that by having any outside entity overlooking the recount, it would be a case of GECOM allowing the outsourcing of its constitutional responsibilities.

The Court of Appeal is expected to hand down its final orders, today.

But Prime Minister, Dr. Keith Rowley, speaking at a news conference, here, said he found the ruling “disturbing”, since it gave the impression that CARICOM had been engaged in something illegal in Guyana.

“This matter of the Guyanese election is one that must be of concern to us, individually, as the state of Trinidad and Tobago, and, collectively, as CARICOM.

“There was a ruling in the Court of Guyana, last week, and I find that ruling quite disturbing, because the ruling was that the actions of CARICOM would deem to be illegal. That finding of a Court must be of concern to every member of CARICOM, because it would be predicated on an understanding that CARICOM had done something that a Court has found to be illegal,” Rowley said.

He told reporters, he wanted them to separate that from the actions of individuals “within the context of the political environment of Guyana”.

“The ruling was a ruling that the actions of CARICOM was illegal. What was that action,” he said, quoting from the agreement that had been reached, between President, David Granger, and the Opposition Leader, Bharrat Jagdeo, inviting CARICOM to send an independent team to “supervise” the recounting of the ballots.

“And, of course, the third signature to that document was the Secretary General of CARICOM (Irwin la Rocque). And I think there was some opportunity for misrepresentation, and that opportunity was seized upon.

“In the document, in the original paragraphs, it speaks, loosely, to CARICOM being invited by these two leaders, who are the contestants in Guyana. It speaks, loosely, about supervising their conduct in counting their votes, where the understanding there, was that CARICOM, using its stature, would be there to see them do what they are supposed to do,” the Prime Minister said.

Rowley said that the second-to-last paragraph of the document noted “that the high level team that these two leaders asked for, to come to Guyana, to see them do what they are supposed to do, it says that the high-level team would supervise the recount, under the auspices of GECOM, and would not engage themselves in the actual counting of ballots. Their presence is to ensure that the recount is done, in a free, fair, transparent and credible manner”.

Rowley, who was part of the CARICOM leaders under the chairmanship of Barbados Prime Minister Mia Mottley, who met with the Guyana leaders on the agreement, said it meant that the CARICOM team would have acted as scrutineers.

“It specifically said that CARICOM will not engage themselves in the actual counting of ballots. But because the word supervise was used in the sentence before, in an understanding that you will be there to see what they do, by the time it was argued in the Court, the outcome was that CARICOM had acted, illegally, and I have a problem with that.

“So now CARICOM looks on and we will await the outcome of the developments there,” he added.

Prime Minister Rowley said, he would be advising CARICOM, going forward, that Trinidad and Tobago’s position “is that, given what has happened so far, given the interpretation, both inside and outside, the Court, that if the Guyanese authorities request a CARICOM present, as they proceed from today, going forward, in counting their ballots or whatever else they do, once a CARICOM presence is requested that presence should be provided”.

‘But, in this case, we are recommending that the presence be provided by the same technical team that was there, before the heads went into Guyana, meaning that CARICOM will be present in the form of expertise from technical people, and do not provide an opportunity for this kind of interpretation to happen again.

“So we will await the developments there. I have not heard that any request has been made for any CARICOM presence and, if it is made, that is the kind of response that Trinidad and Tobago will support, that CARICOM be present at a level of technical people, who will, in no way, interfere with the electoral process or Guyana’s Constitution…,” Rowley told reporters.