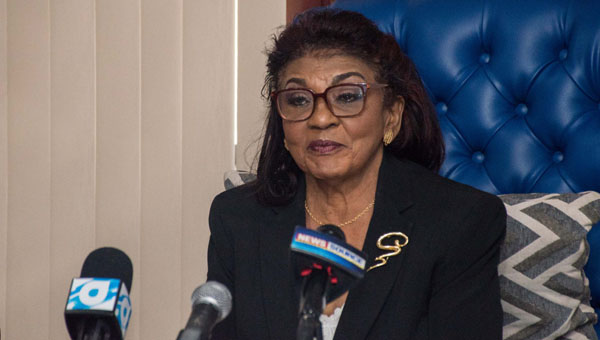 GEORGETOWN, Guyana, May 19, 2020 (CMC) – The main opposition — the People’s Progressive Party/Civic (PPP/C) — publicly called on GECOM Chair, retired justice Claudette Singh, today, to disclose what matters had been discussed with President David Granger, when he met with her and the Commission’s Secretariat staff, last Sunday.

Granger, who visited the Arthur Chung Conference Center (ACCC), where the recount of ballots from the March 2 regional and general elections is taking place, also met with the three-member delegation from the Caribbean Community (CARICOM) that is observing the event.

The PPP/C said President Granger was offered the “extraordinary privilege” and “preferential treatment” of meeting the CARICOM high-level team and GECOM officials, and that must now be accorded to all Presidential Candidates.

Granger told reporters, following the visit, that there were issues that were raised with him, but he would prefer for Singh and the GECOM Commissioners to deliberate on those issues, which will have to result in decisions that have to be made by the Commission.

“Too often in this country, we get into the realm of politicizing things, which are not to be politicized. In my humble opinion, that is in the realm of the unnecessary politicking, that this country gets engaged in and acts of absurdity,” Alexander told reporters, noting that the opposition had gone into a sphere of needless politicking.

On Monday, GECOM Public Relations Officer, Yolanda Ward, said during the meetings with the President, he expressed his gratefulness for the progress of the recount, and also noted his expectations that the process will be concluded in an expeditious manner.

Alexander told reporters that Opposition Leader, Bharrat Jagdeo, had a few days prior to Granger’s visit, met with the GECOM Chair, when he visited the ACCC, where the recounting is taking place.

“We had all of the politicians visiting this place. A few days ago, we had a visit by the General Secretary of the PPP/C. I am advised that during that visit, he was entertained by the Chair. It was not a Commission meeting; it was not dissimilar to the meeting with the President. Former President Jagdeo met with the Chairperson and others. We, Commissioners, were not called upon to be present,” Alexander said.

He added, while “Mr. Granger” is the Presidential Candidate of the ruling coalition — A Partnership for National Unity (APNU) and the Alliance For Change (AFC) — “whether we like it or not”, he remains the sitting President of Guyana and his visit had nothing to do with an electioneering period.

“We are not electioneering. We are trying to conduct a transparent recount at this time, and I don’t think that the presence of President Granger, or Mr. Jagdeo, would be impacting the process,” Alexander claimed.