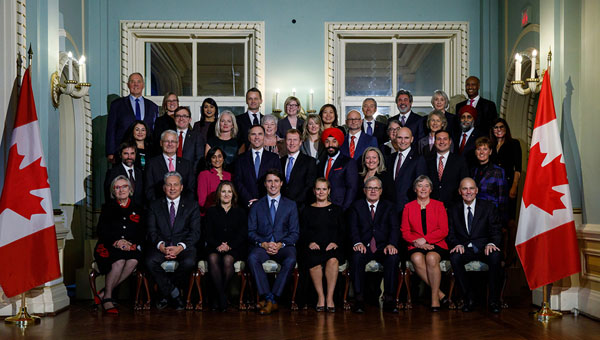 Prime Minister Trudeau, Governor General Julie Payette and Cabinet ministers participate in the swearing-in ceremony of the 29th Canadian Ministry, November 20, 2019. The principles of diversity, equity and inclusivity are important, and taking action so that Canadian politics are not dominated by one segment of society is necessary to democratize our institutions. Photo credit: Adam Scotti/PMO.

There are many ways politicians and bureaucrats can show leadership in response to calls to democratize Canadian politics. Specifically, there are a lot of things men can do, particularly heterosexual white men.

As the largest demographic in Parliament, they can lead the way by stepping back or stepping aside, in order to create meaningful opportunities to engage more women, Indigenous, Black and marginalized peoples.

Let’s face it, if we are to transform the culture of Canadian political institutions, we must take immediate, deliberate and intentional action.

As co-authors, one of us is the only Black woman MP, who served in the 42nd Parliament (2015-19) and is a champion of diversity, equity and inclusivity. The other has interviewed more than 100 Canadian politicians and political staff for a book about party discipline. We met as part of that research, and share a deep concern about the need for the political elite to make room for diverse voices in the House of Commons.

Representation matters
When interacting with politicians, it becomes clear that at different points in their careers they approach politics with distinct philosophies about representation.

Some elected officials take a principled stand on big picture issues. Some believe that voters trust them to figure things out, while others feel a duty to follow the wishes of constituents. Far too many Canadian politicians are guided by loyalty to their political party and leader, whereas some are motivated to champion the concerns of people who share similar identities or similar experiences.

Prioritizing the composition of legislatures and looking at public policy through the lens of gender, Indigeneity, race or other identity characteristic is sometimes known as “descriptive representation,” a term coined by American political scientist Hanna Pitkin in her landmark book The Concept of Representation. In it, Pitkin dissects what the contested concept of representation means. She makes a compelling argument that a democratic legislature must be a forum to hear from a diversity of people’s voices. This is important because otherwise these voices are excluded from political debate and from public policy decision-making.

But in what tangible ways can diversity improve democracy?

Identity and intersectionality
Diversity is necessary for citizens to see themselves represented. Since 1867, and before, generations of white, land-owning men were the beacon of political leadership. Since the Second World War, they have increasingly toed the party line, as have others, recruited into a political system that values conformity over diversity. In today’s world, it is important to remember that we are each the product of a variety of different identities that intersect to make us who we are. For some, their different identities add layers of oppression in politics.

Studies have argued that descriptive representation can fundamentally support the principles of democracy. This extends beyond reshaping the composition of legislatures: listening and receiving input from diverse voices can result in better governance and better policy. A good example is research showing that women leaders have been rated significantly more positively than men during the COVID-19 pandemic. In particular, women are thought to have exhibited better interpersonal skills in managing the crisis.

Listening to marginalized voices is needed to help shape Parliamentary decisions. Deliberations around medical assistance in dying legislation (Bill C-7) would have benefited from improved listening to disability groups and racialized communities. 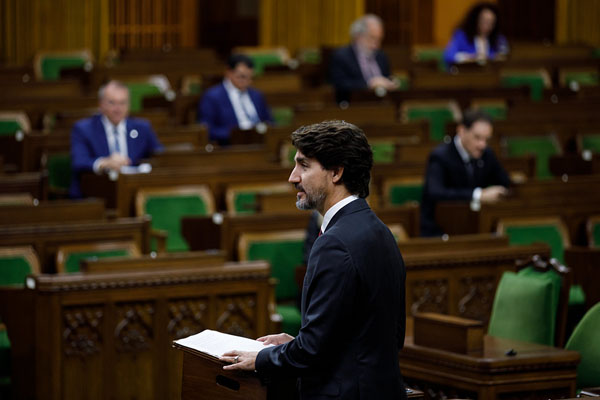 Diversify legislatures
More diverse legislatures can transform Canadian politics in a profound way: challenging the dogma of party discipline that keeps politics organized but corrodes representation. In Ottawa and the provinces, political parties have an iron grip over politicians, and group conformity is expected.

Why is it normal in Canada that a politician jeopardizes their parliamentary career by taking a public stand different from the party leader? Don’t we want politicians who feel that they can speak truth to power? Homogeneity in party politics might work for partisans, but does it work for constituents? Even MPs become frustrated with democratic institutions when they are reduced to robots, encouraged to vote along party lines and repeat talking points.

Electing a broader array of Canadians can help break down party silos and soften polarization. In workplaces, more heterogeneity can stir internal conflict and rattle group norms. But injecting different perspectives also enriches the ability of a group to come up with creative and innovative solutions. The same is true in politics.

The more diverse the voices that occupy seats in legislatures, the more political parties can benefit from better policy which, in turn, benefits the public. Sadly, there is little evidence that partisans are open to listening to people willing to rebuff the “team player” mentality that dominates Canadian Parliament. A good way to help change that is to change who is being elected.

This can include white men not seeking re-election in order to create space for others, encouraging people to run for political office, and also helping the newest members thrive when they get there.

Taking proactive steps toward fewer white men in politics in order to create an opening for others has worked in British Columbia. In 2011, the B.C. NDP introduced a radical policy that when a male legislator vacates a seat, the party must nominate a woman, racialized person or someone from other underrepresented groups in Canadian politics.

In the 2020 provincial election, the B.C. NDP won a majority of seats, and for the first time in Canadian history a governing party’s caucus has more women than men, as well as more people of colour serving than any B.C. caucus ever elected before. Diversity in Premier John Horgan’s caucus meant that he had more choices to assemble a diverse cabinet. The party’s policy of affirmative action has translated into meaningful, profound change in both the legislative and executive branches of government. Bold action like this is needed to achieve the ideals of descriptive representation.

Ensuring democracy thrives
The principles of diversity, equity and inclusivity are important, and taking action so that Canadian politics are not dominated by one segment of society is necessary to democratize our institutions. Regardless of party affiliation, or political ideology, the urgency of now demands that those with power choose to challenge the status quo.

To ensure democracy thrives in Canada, politicians need to listen to the voices of those who are often on the margins of our political ecosystem and act accordingly. Gaining knowledge is a necessary first step, and men in positions of authority can help create a thriving democratic landscape by opening opportunities to people who are different than them.

A good place to start is for men to listen.

Celina Caesar-Chavannes is an Adjunct Lecturer, in the Faculty of Health Sciences, at Queen’s University, Ontario; and Alex Marland is a Professor, in Political Science, at Memorial University of Newfoundland.