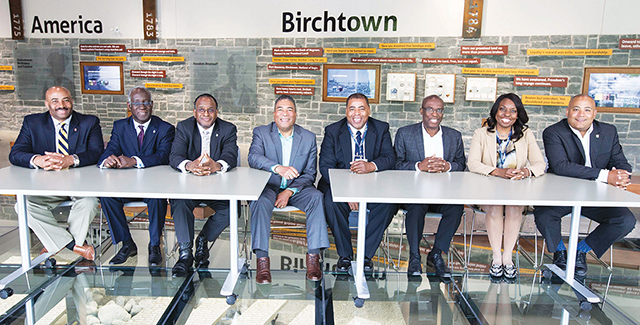 BIRCHTOWN, Nova Scotia — Black federal and provincial legislators concluded a successful three days of meetings today, June 10. The inaugural Black Government Leaders Summit took place at the historic Black Loyalist Heritage Centre in Birchtown, Nova Scotia.
“The time is right for this first meeting,” said Tony Ince, Nova Scotia Minister of Communities, Culture and Heritage. “A record number of federal and provincial leaders are black, the UN Decade for People of African Descent has been declared, and public interest in Black history has been focused by Lawrence Hill’s The Book of Negroes.”
“This is a unique opportunity to address issues affecting the black community across the country,” said Michael Coteau, Ontario Minister of Tourism, Culture and Sport. “In the absence of a single hint of partisanship, we were able to carefully focus our discussions on black Canadians, including how to better co-ordinate efforts among black legislators across jurisdictions.”
Delegates began with presentations from international and local experts.
Gloria Nwabuogu, human rights officer with the United Nations Office of the High Commissioner for Human Rights in Geneva, explained the significance of and strategy behind the International Decade for People of African Descent.
Peter Flegel, director of programs and communications for the Michaëlle Jean Foundation, described his organization’s use of arts to engage youth in generating social change.
Wayne Hamilton, executive director, African Nova Scotian Affairs division of the government of Nova Scotia, gave insight into Nova Scotia’s unique model to support healthy, thriving black communities.
In the afternoon, delegates brought forward concerns to establish the group’s priorities for the future.
The leaders adopted United Nations Resolution 69/16, article 9, sections A and B, as the group’s guiding principles. The sections urge working toward the full enjoyment of human rights, full participation in society for people of African descent, and toward better understanding of, and respect for, their culture and contributions to social development.
They also agreed to meet twice during the next year to tackle four initial areas of priority: youth engagement, economic opportunities, education and health.
The leaders thanked event sponsor TD Canada, for its recognition of the summit’s significance to all Canadians.