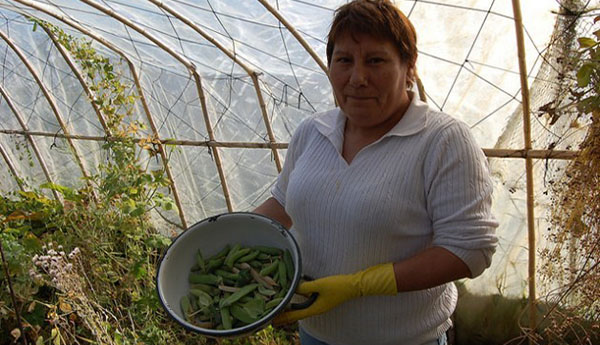 Blanca Molina holds up organic peas picked in one of the four greenhouses she built with her own hands on her small family farm in Villa Simpson, in the Aysén region in the Patagonian wilderness in southern Chile. Credit: Marianela Jarroud /IPS.

SANTIAGO, Apr 13, 2016 (IPS) – Rural women in Latin America continue to face serious obstacles to land tenure, which leave them vulnerable, despite their growing importance in food production and food security.

“Women are the most vulnerable group of people with respect to the question of land tenure,” Soledad Parada, a gender adviser in the regional office of the United Nations Food and Agriculture Organisation (FAO), in the Chilean capital, told IPS.

She added that “in general, the activities carried out to improve the land tenure situation have failed to take women into account.”

As a result, “women have access to land through inheritance or because they were granted it by an agrarian reform programme, but they are always at a disadvantage,” she said.

Like in other developing regions, family agriculture is the main supplier of food in Latin America, and women produce roughly half of what the region’s 600 million people eat.

An estimated 58 million women live in the countryside in this region. But “the immense majority of land, in the case of individual farmers, is in the hands of men,” said Parada.

“Only between eight and 30 percent of land is in the hands of women,” she said, which means that only this proportion of women “are farmers in the economic sense.”

The country with the largest percentage of land owned by women is Chile (30 percent), closely followed by Panama, Ecuador and Haiti. At the other extreme is Belize (eight percent), with just slightly larger proportions in the Dominican Republic, El Salvador and Argentina.

Another FAO study, conducted in only a handful of countries in the region in 2012, reported that women accounted for 32 percent of owners of land in Mexico, 27 percent in Paraguay, 20 percent in Nicaragua and 14 percent in Honduras. 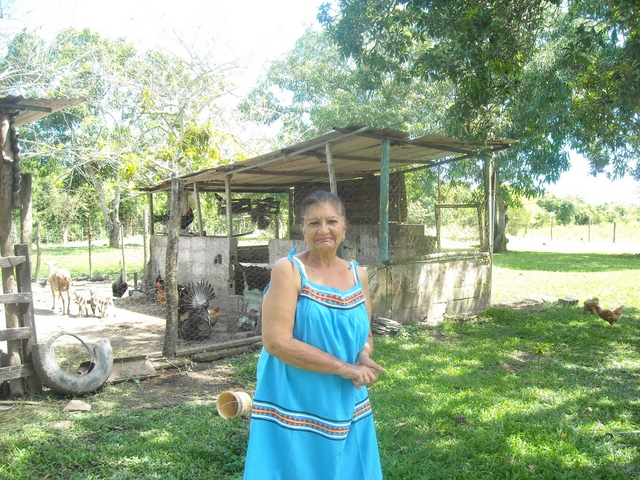 Aura Canache, in front of one of her sheep enclosures on her small farm, less than one hectare in size, located 130 km from Caracas, in the Barlovento farming region in the coastal area of northern Venezuela. She has had difficulty accessing credit to help run her farm. Credit: Estrella Gutiérrez/IPS.

Furthermore, women tend to have smaller farms with lower quality soil, and have less access to credit, technical assistance and training.

“Of people who work in technical assistance, 98 percent do not even think of visiting women,” land tenure expert Sergio Gómez, a FAO consultant, told IPS.

Moreover, he said, “All formal procedures require the man’s signature, otherwise the visit doesn’t count, because the property is in his name.”

The gender gap in land ownership is historically linked to factors such as male preference in inheritance, male privilege in marriage, and male bias in state land redistribution programmes and in peasant and indigenous communities.

To this is added the gender bias in the land market.

Because of all of these handicaps, women “have been explicitly left out” of land ownership, Parada said.

There are other inequalities as well. In Mexico, for example, women in rural areas work 89 hours a week on average, compared to just 58 hours for men. A similar gap can be found throughout the region.

Nevertheless, nearly 40 percent of rural women have no incomes of their own, while only 14 percent of men are in that situation.

Some progress has been made in recent years, as the region has experienced a significant increase in the proportion of farms in the hands of women. Parada said that in the last few decades, many countries in the region, such as Nicaragua, reformed their laws to ensure more equal access to land for women.

“In other countries advances have been seen in terms of legislation, such as setting a condition that in the case of a married couple, both members are in charge of the land, and the authorisation of either one is needed to carry out any transaction,” Parada said.

But much more still needs to be done, largely because the effective right to land not only depends on legislation, but also on the social recognition of this right – and inequality still persists in this respect.

“All of this has tremendous consequences,” Parada said.

“The fact that land is mainly in the names of men, especially in the case of family farms and small-scale agriculture, represents an enormous barrier for women to access other kinds of benefits,” she said.

Alicia Muñoz, the head of the Chilean National Association of Rural and Indigenous Women (Anamuri), told IPS that achieving the right to land “has been one of our longest and biggest struggles.”

“We are fighting for women’s work to be recognised, because it is women who are the leaders in the countryside, in small-scale family agriculture. Access to land tenure has always been a demand of peasant women,” she said.

Muñoz said it is a “cultural issue” faced by countries in the region which so far has no solution.

Despite all of the efforts to close the gender gap in different countries of Latin America, “in agriculture, the men speak for the women,” he said. 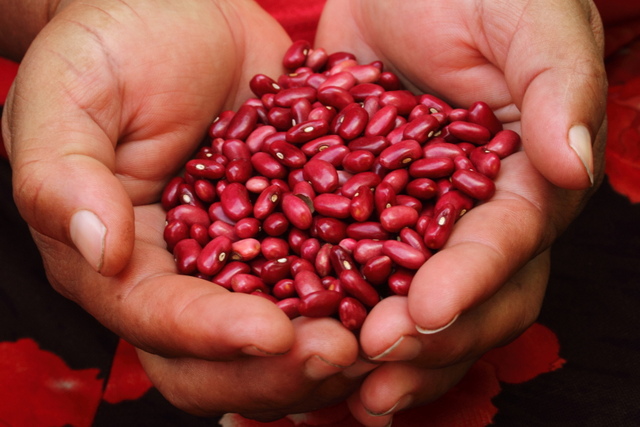 The hard-working hands of Ivania Siliézar pick improved beans grown on her three-hectare farm in the eastern Salvadoran department of San Miguel. Thanks to these native seeds, her output has doubled. Credit: Edgardo Ayala/IPS.

Against this backdrop, gender equality is one of the main “implementation principles” of the Voluntary Guidelines on the Responsible Governance of Tenure of Land, Fisheries and Forests in the Context of National Food Security, approved in 2012 by theCommittee on World Food Security (CFS) to facilitate dialogue and negotiations.

The guidelines adopted by the intergovernmental CFS, which is described as the foremost inclusive international and intergovernmental platform for all stakeholders to work together to ensure food security and nutrition for all, say states must ensure that women and girls have equal tenure rights and access to land, independently of their marital status.

The document also urges states to “consider the particular obstacles faced by women and girls with regard to tenure rights and take measures to ensure that legal and policy frameworks provide adequate protection for women and that laws that recognize women’s tenure rights are enforced and implemented.”

The CFS stresses the need to guarantee women’s participation in all decision-making processes, as well as equal access to land, water and other natural resources.

But in order to achieve this, the presence of women in negotiations must be fomented “by the authorities or by whoever agrees to implement the guidelines. And the FAO has a role to play in this,” Parada said.

Muñoz agreed, saying that “both governments and the FAO have to promote women’s participation, otherwise everything will stay the same.”

“We love land and nature, we are very reliable and responsible,” the Chilean activist said. “It is women who know about family farming, who carry the farms on their shoulders. It’s time we were recognised.”