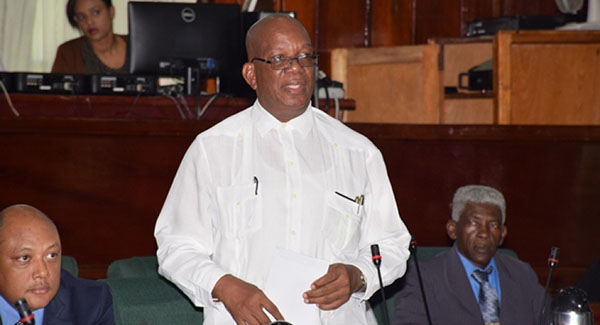 GEORGETOWN, Guyana CMC – The Anti-Money Laundering and Countering the Financing of Terrorism (Amendment) Bill was passed by the National Assembly, late last Friday.

The bill which was presented by Attorney General Basil Williams will lead to the creation of an independent ten-member authority, overseeing the Financial Intelligence Unit (FIU) .

The FIU along with a director, will be appointed transparently by an Appointing Committee and will then see them going to the National Assembly for ratification and approval.

According to Williams, the day-to-day operations of the FIU will be interrupted, and the unit’s director and deputy will be free to fulfill their mandates.

He added that the provision to seize Guyana currency in amounts of $10,million or more, would be based on cogent evidence before any such seizure or detention can be made.

This would see seizures being effected only on provision of evidence by the FIU or the Special Organized Crime Unit (SOCU).

Finance Minister Winston Jordan, in calling for the bill’s passage said “We have gone through tremendous pain, and I think we have passed the stage of aborting.”

He said the bill represents the government’s resolve to fight the scourge of money laundering and terrorist financing, both of which can be quite severe.

“If sections of the financing system are owned or controlled by criminal elements, authorities may encounter difficulties in supervising these institutions or identifying problems where financial stability is compromised”.

He added that draft regulations are being done to ensure that the methodology of freezing assets as outlined, are in conjunction with the United Nations Security Council.

This bill sought to amend the principal AML Act, which was passed in 2009, and introduces a Financial Intelligence Unit, as well as the enhancement of sanctions and granting greater powers to authorities tasked with safeguarding Guyana’s obligations to the international financial system.

The Finance Minister said government officials will be meeting the Caribbean Financial Action Task Force (CFATF) officials in August and the Act will be examined for compliance.

In September, the world body, the Financial Action Task Force (FATF) will then decide on Guyana’s fate.