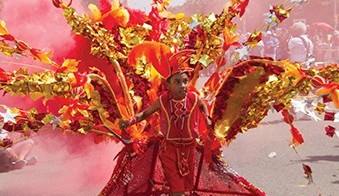 Photo above by Anthony Berot.

TORONTO, Ontario — The Festival Management Committee (FMC), organizer of the Scotiabank Toronto Caribbean Carnival, presented a public preview of what’s to be expected when the big parade is held on August 1.

Last Saturday’s FMC Junior Carnival and Family Day was a colourful and exciting spectacle, enjoyed by both children and adults.

It included a jump up on the streets of Malvern, culminating with youth entertainment, as well as the sale of food, and arts and craft, at Malvern and Neilson Parks.

The event, described by many as the best children’s carnival in years, was supported by private and public sector officials including Ontario Premier Kathleen Wynne and Toronto Mayor John Tory.

Junior Carnival and Family Day, according to the FMC, is organized “to allow young people to participate as producers, performers and presenters’’.

Among upcoming carnival events are a Calypso Extravaganza on July 25 at the Chinese Cultural Centre at 5183 Sheppard Ave. East; and the Pan Alive competition on July 31 at Lamport Stadium, 1151 King St. West.

Tommy Crichlow, a founding-member of the Ontario Steelpan Association (OSA), and leader and arranger of Panmasters Steel Orchestra, said his band is ready for both Pan Alive and the street parade on August 1 on Lakeshore Boulevard.

“I would ask all the steelbands to put their best foot forward. Pan Alive – our steelband event – must be the biggest thing after the parade. I would love to see this,’’ Crichlow said Monday at an OSA press conference.

“I look forward to the road. Funding or no funding, I’m going on the road,’’ said Crichlow, adding participating in the street parade is an opportunity for steelbands to make a “visible impact’’.

“My band has to be on the road. I’m going on the road and I hope all the other steelbands do the same. This is a spectacle and you have to look nice.’’

“Afropan is the people’s band and we’re trying to please the people as best as we could this year,’’ Earl La Pierre Sr., founder and arranger of Afropan, told journalists at Monday’s news conference at Twilight Family Restaurant in Scarborough.

For the first time ever, Pan Alive will be streamed lived on the internet. It will be carried on www.caribbeanconnectionstv.com.

One of the special features of this year’s competition will be a tribute to the late Miley Joseph Duke, founder and arranger of New Dimension Steel Orchestra.

New Dimension will not compete in Pan Alive. However, members of the band will make a guest appearance and also performance the Canadian national anthem to open the show.

“Seldom do you meet someone who wants to see the good in people and genuinely wants to see them thrive and be the best they can be. Miley Duke was that type of man,’’ said Jose Mochado, a longtime friend of Duke. Mochado is now overseeing the operations of New Dimension.

“His heart was in the right place,’’ Bhagan said of Duke. “He loved pan, he loved the association, and he was a good storyteller; he could tell a story for hours.’’

Denise Herrera-Jackson, FMC’s chief executive officer, reported that overall funding for the carnival – from the provincial and federal levels of government – has been diminishing.

“Any funding we get has to be applied to specific activities,’’ she said.

Herrera-Jackson’s comment followed remarks from steelband leaders and supporters, complaining of underfunding for the pan movement in Toronto.

“Most of the steelbands have money problems,’’ La Pierre said. “I’m just thankful that we are getting something but I wish it was little bit more, so that we don’t have to be scrunting. Given same opportunity and funding, steelbands could produce something bigger, on the level of mas’ bands.’’