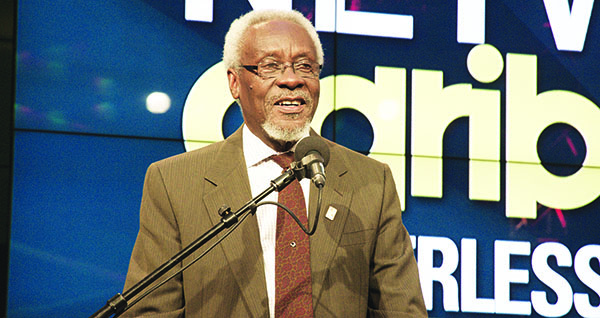 In an open letter to the British leader, Patterson said the slave trade is still “a most heinous crime against humanity — a stain which cannot be removed merely by the passage of time”.

Cameron in a joint address to the Jamaica parliament when he paid an official visit to the island last month, acknowledged the “wounds of slavery run very deep” but avoided speaking on the issue of reparation as being called for by Caribbean countries.

Cameron, the first British Prime Minister to visit Jamaica for the last 14 years, said the slave trade was one “from which history has drawn the bitterest of lessons.

“Slavery was and is abhorrent in all its forms. It has no place whatsoever in any civilized society, and Britain is proud to have led the way in its abolition.

“That the Caribbean has emerged from the long dark shadows that it casts, is testament to the resilience and spirit of its people. I acknowledge that these wounds run very deep indeed, but I do hope that as friends, who have gone through so much together since those darkest of times, we can move on from this painful legacy and continue to build for the future,” Cameron said in his only remarks to the transatlantic slave trade.

Earlier, Jamaica’s Prime Minister Portia Simpson Miller told the legislators that she had brought up the issue of reparation during the bilateral talks with Cameron on Tuesday.

“Let it be clear that Jamaica is committed to a spirit of mutual respect, openness and understanding as we seek to actively engage the UK on the matter,” she said, noting the role of Caribbean Community (CARICOM) countries in establishing the Reparation Commission, headed by Barbadian academic Sir Hilary Beckles, who in an open letter to Cameron said that reparation justice is an issue that cannot “be further ignored, remain under the rug, or placed on back burners”.

Prime Minister Simpson Miller said “at the same time we remain unshaken in our conviction that there is more than unites us as a people and government”.

In his letter, Patterson, who served as the island’s sixth Prime Minister from 1992-2006, said that the “attempt to trivialise and diminish the significance of 300 years of British enslavement of Africans, and the trade in their bodies reflect the continued ethnic targeting of our ancestors and their progeny for discriminatory treatment in both the annals of history and in the present.

“The 180 years of slavery in Jamaica remain fresh in living memory. There are people alive in Jamaica today, whose great grandparents were a part of the slavery system, and the memory of slavery still lingers in these households and communities.

“Those 180 years were followed by another 100 years of imposed racial apartheid, in which these families were racially oppressed by British armies and colonial machinery. The scars of this oppression are still alive in the minds and hearts of a million Jamaicans.”

Patterson said that to speak of slavery as something from the Middle Ages is insufficient.

“For our communities, its legacies are still present in their memory and emotions. To reject this living experience, is to repudiate the very meaning and existence of these people’s lives,” he said, adding “how can we simply forget it and move on to the future? If there is no explicit admission of guilt now, when will be the proper time?

Patterson told the British leader that he had argued that Britain abolished the slave system, and the credit for this resonates in the British Parliament today and shows British compassion and diplomacy.

But Patterson asked “where is the prior confession that Britain fashioned, legalised, perpetuated and prospered from the slave trade?

“Indeed, the facts speak to a different explanation. In Jamaica the enslaved led by Sam Sharpe tried to abolish slavery themselves, three years before your Parliament acted. The British army destroyed these freedom fighters and executed their leaders.”

He said this attempt to destroy the seed of freedom and justice in Jamaica, continued for another hundred years. In 1865, the peasants sought to occupy Crown lands in order to survive widespread hunger. The British government sent in the army and massacred those people, executing Paul Bogle, George William Gordon and other Leaders.

“Furthermore, the British Act of Emancipation reflected, that the enslaved people of Jamaica were not human but property. The 800,000 Africans in the Caribbean and elsewhere were valued at ₤47 million (One British pound =US$1.51 cents). The government agreed to compensate the slave owners ₤20 million, and passed an Emancipation Act in which the enslaved had to work free, for another four to six years in order to work off the ₤27 million promised slave owners.  It was they who paid for their eventual freedom.”

Patterson said that the enslaved paid more than 50 per cent of the cost of their market value, in compensation to slave owners.

“This is what your Emancipation Act did.  The enslaved got nothing by way of compensation. The Act of Emancipation was self- serving, and was designed to support British national commercial interests alone.

“You have refused to apologise. Yet your government has apologised to everyone else for horrid crimes. Are we not worthy of an apology or less deserving?

Patterson reminded the British leader that contrary to his view, “the Caribbean people will never emerge completely from the “long, dark shadow” of slavery until there is a full confession of guilt by those who committed this evil atrocity.

“The resilience and spirit of its people” is no ground to impair the solemnity of a privileged Parliamentary occasion, and allow the memory of our ancestors to be offended once again.

“The Caribbean people have long been looking to the future. This is what we do in our development visions, but these legacies are like millstones around our necks. We look to reparatory justice as the beginning of shaping a new future. We invite Britain to engage in removing this blot on human civilisation, so that together we can create a new and secure future,” Patterson said.