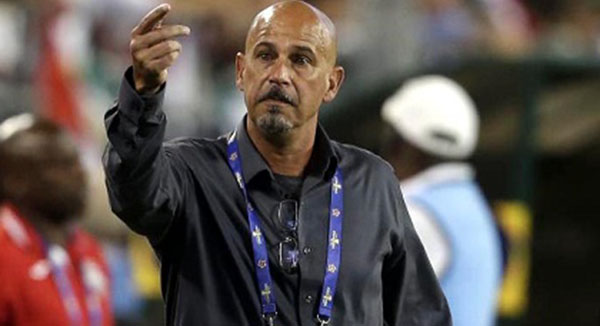 Photo above: Trinidad and Tobago football Head Coach, Stephen Hart, has warned of the dangers posed by the St. Vincent and Grenadines side.

PORT OF SPAIN, Trinidad, Mar 3, (CMC) – Trinidad and Tobago Head Coach, Stephen Hart, has warned his Soca Warriors about the danger St. Vincent and the Grenadines will pose, when the two teams meet in the fourth round of CONCACAF 2018 World Cup qualifiers, later this month.

The Warriors will travel to Kingstown for the first leg on March 25 at the Arnos Vale Stadium, before hosting the Vincentians, four days later, at the Hasely Crawford Stadium here.

Hart said, SVG was a dangerous side, and T&T would have to be at the top of their game, in order to earn a positive result.

“I was quite impressed, actually. They have some adventure going forward,” Hart said of the SVG side.

“They are organized, and if you are not concentrating fully, they can surprise you. They did the US. They started the game brightly, they opened the scoring and when a team scores on you, particularly if they are at home, you sort of create doubt in your mind.

“I think they are a very good team and we have to be at our best.”

Guatemala is third on three points, while SVG is at the bottom of the group, without a point after two losses in their outings.

Hart stressed, it was important that the Warriors came away from the SVG fixtures with full points.

“For me it’s simple. We have two games to play. You can only play the first game before you play the second game,” he said.

“And the first game is an away game, so we have to be very calculating, because most of my players finish playing [with their clubs] on the 19th or the 20th, but the bottom line is, we want to get maximum points out of the two games and then we will see how the other games go in the group.”

The bulk of T&T’s squad ply their trade in foreign leagues. This means Hart will not have them available until just days before the qualifiers.

Once the entire squad is assembled here, however, Hart said, they would make the most of the limited time together.

“Traditionally this is one of the most complicated times. This date – March right through to May – mainly because you have a number of leagues trying to get the league over with, players are playing either to be promoted or to avoid being relegated.

“And to get players is going to be very difficult. Already most of our players play either on the 19th or the 20th, so they wouldn’t be arriving here before the 21st, 22nd, and that only gives us three or four days to prepare but it is the nature of the make-up of the squad.

“It’s the nature of the Trinidad and Tobago team at the moment with so many players spread all over the world.”

He added: “I think we will try to get everybody here. In that way we are in control of the training pitch and the entire environment. We can get some training sessions in private.”