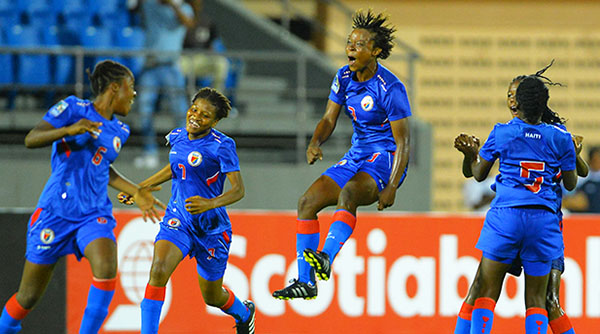 Photo above: Haiti (pictured) celebrates after scoring against Canada in a CONCACAF Under-17 Women’s Championship match on March 7, 2016, in St. George’s, Grenada. (Photo: Mexsport).

ST. GEORGE’S, Grenada , Mar 8, (CMC) — Haiti’s women’s football team stormed back from a goal down, to beat Canada two-one, clinching first place in Group A, while Guatemala handed host, Grenada, a seven-nil drubbing at the 2016 CONCACAF Under-17 Championship, yesterday.

The Haitians recovered to score twice in the final nine minutes against the Canadians, while Guatemala’s, Niurka Oliva, scored twice, as Grenada crashed to its third straight heavy defeat at the National Football and Athletics Stadium.

On her 17th birthday, Sarah Stratigakis gave Canada a short-lived 1-0 lead, but Mikerline Saint Felix equalized and then Shelsie Melissa Dacius converted a penalty kick in the 84th minute to give the Haitians victory.

Four minutes later, Saint Felix scored her third goal of the tournament, after Melchie Daelle Dumonay delivered a free kick from the right edge of the box, near the goal line.

Dacius, who had a brace in the 13-0 win over Grenada, whipped her penalty into the lower left corner past goalkeeper, Lysianne Proulx, for the game-winner, after Kennedy Faulknor fouled Nerilia Mondesir in the area.

Adriana Ordoñez gave the Central Americans a 1-0 lead in the 13th minute, firing into the left side of the net from 23-yards out with her right foot off an Oliva feed.

In the 34th minute, Guatemala doubled its advantage after goalkeeper, Holly Charles, saved Ordoñez’s header. Grenada could not clear the ball, which fell to Kellin Mayen, who directed a pass to the top of the six-yard box, where Oliva stabbed home for her first goal.

Mayen scored in the second minute of first-half stoppage time, from three-yards out, after Sofia Portabella left-sided corner glanced off the head of a defender.

Oliva extended the margin, four minutes later, following the interval, thanks to an assist from Mayen. Guatemala then netted three times in the final 30 minutes through Oliva, a Resheda Charles own-goal and a neat flick on the goal line by Didra Martinez.