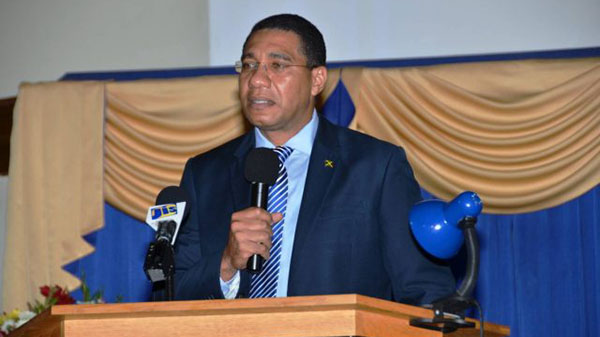 While bringing greetings during the divine worship and Harvest Thanksgiving service at the Montego Bay New Testament Church of God in St. James, on Sunday April 24, Holness said the church have been making a difference and should continue that practice.

“Things may not be what we want them to be, but we must say thank God they are not as bad as they could be….My message today is that you can make a difference in Jamaica,” Mr. Holness said.

“As I stand at this platform, I reach out to all the young men in Jamaica, particularly in the inner city communities that surround Montego Bay, you have a choice. Violence is not the only means to resolve conflicts,” Prime Minister Holness stated.

He told the congregation that the role and duties of the government in helping the youth is now clearer than ever, and that the task will be taken on with all hands on deck.

He further noted that the government will be putting plans and programs in place to assist in the development of young people.

“I continue to maintain that there is a star in every ghetto youth. We understand your dreams, your ambitions, your aspirations, your energy, your enterprise and your industry, and the government has a duty to invest in that, to invest in you and we commit to doing that,” Mr. Holness stated.

The Prime Minister also challenged the youth to make a choice to turn from anti-social activities, which will assist greatly in the reduction of crimes, especially murders.

“We call upon the young men…exercise the right choice, make a choice today. You are not going to be involved in the crimes, the wrong doing, the murder. And, if every young man was to make that choice, the murder rate would go right down and the growth and the employment would go right up,” Holness said.

He added that the government will continue to work hard in bringing prosperity to Jamaica, which he said can be achieved through partnerships with the church, private sector and all civic and social groups.