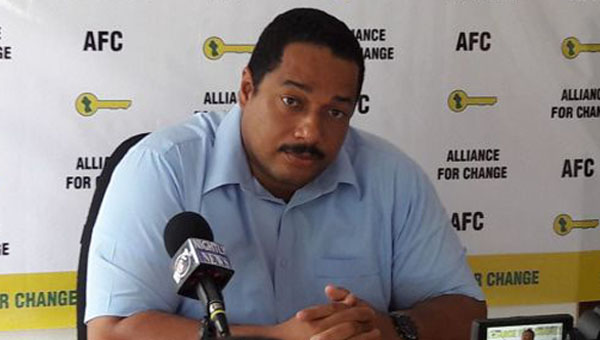 Marlon Williams, General Secretary of the Alliance For Change, the minor partner in the David Granger-led coalition government, said that the party would contest the elections as a member of the APNU coalition.

The main opposition People’s Progressive Party (PPP) has been calling on Granger to name the date for the elections, after it successfully tabled a motion of no confidence on December 21, last year, in the three-and-a-half-year-old government.

While the government has appealed a High Court ruling that re-affirmed the motion, the PPP has named former minister, Irfaan Ali, as its presidential candidate.

Speaking at a news conference, yesterday, the General Secretary of the AFC, Marlon Williams, said that the party would contest the elections as a member of the APNU coalition.

“Whatever you might say about the present coalition government, and its last four years, the question is, who do you trust, based on merit, based on experience? Who do you trust? Who can you trust? And based on the records of the two opposing parties that are going into this elections, that is the question for Guyanese,” he told reporters, in relation to the two candidates for the position of President of Guyana.

Williams said that the election would be contested, on which party will be better able to manage the resources and affairs of the country, given the latest announcement, yesterday, by the US-based oil giant, ExxonMobil, that it had discovered two more major oil fields.

“Who are you going to trust, to put Guyana’s natural resources in their hands? There are two distinct options and you’ve got to make that choice — a Bharrat Jagdeo surrogate or David Arthur Granger? That is your choice.”

Williams said that as Guyana moves forward and prepares for a greater role on the international stage, there will be the need for a properly functioning government and opposition. He said he believes the coalition will be the best choice.

“This is Guyana’s chance, and this is our moment to shine, and we have got to ensure that whatever decisions we make, we safeguard Guyana, for a long time to come. It is not a slogan. It is a practical position. Whenever elections come, you have got to decide which direction you want to put Guyana.

“Do you want to put it in a Granger-led government, where no longer, nobody is paying four million dollars for a toilet bowl, or GUY$80 million for a five million dollar building, or building a wharf that barely survives the cutting of a ribbon, you have got to decide.”

Voters, here, are awaiting the Guyana Elections Commission (GECOM) on how soon it could manage the elections. It has already hinted at holding the polls in July, at the earliest.

The PPP wants the regional and general elections to be held on March 19, in keeping with the 90-day stipulation in the Constitution, following the vote of no confidence.

The APNU is planning a lunchtime protest for Thursday, to ensure that GECOM conducts registration and claims and objections in time for the elections.