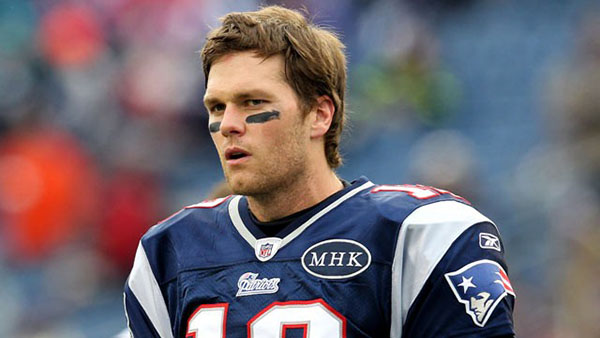 FOXBOROUGH, Massachusetts – The state of the New England Patriots might have been summed up by a scene Sunday night. The dozens of reporters waiting for Kenbrell Thompkins in the din of a victorious Patriots locker room were spilling over into another player’s locker. In that empty locker, with the reporters’ backs turned to it, sat a box of mail, waiting for the player’s return.

The Patriots are waiting for his return, too. But while Rob Gronkowski remains curiously absent from the lineup week after week, and while that absence continues to strangle New England’s red-zone options, the team is, in Tom Brady’s word, “grinding,” outlasting opponents as much as outplaying them, conjuring victories out of the football equivalent of spare parts and duct tape.

There has been a feeling watching the Patriots early this season that they are hanging on by their fingernails, surviving and advancing through a series of clunkers, waiting for the holes in their roster and in their attack to be stitched up and for the seamlessness to arrive. Maybe it will never come, not even when a physically compromised Gronkowski finally returns.

Still, the Patriots were able to stun the New Orleans Saints 30-27 on Sunday — not with dazzling talent, but with relentless resourcefulness. They ran for two touchdowns. They played defense. Brady’s brilliance took over in the waning seconds. The result, oddly, seemed even more exhilarating to the Patriots (5-1) than some of their more machine-like efforts of old.

“Sorry if you had to rewrite some of those stories there at the end,” coach, Bill Belichick, bubbled. “What a football game. I feel like that took about five years off my life.”

It certainly didn’t do wonders for Saints general manager Mickey Loomis, who silently stared at the ground and shook his head slightly to himself on a long, quiet elevator ride as the game ended. Most galling for the Saints was that, after rallying from a 17-7 halftime deficit, they could not get even one first down on either of two drives that might have closed things out — after the Patriots failed on a fourth-down attempt deep in their own territory and after a Brady interception — both coming with less than three minutes to play.

For those holds, Brady can thank his defense. And for shutting out Saints tight end Jimmy Graham, who entered the game as the league’s receptions leader, Brady can personally thank cornerback Aqib Talib. When the Patriots got the ball back with just 1:13 remaining, Brady constructed the winning drive out of nothing more than desperation. He was forced to return to receivers who had dropped passes — so many drops — earlier in the contest.

Brady’s security blankets have been snatched away — Wes Welker to Peyton Manning’s embrace in Denver, Gronkowski and Danny Amendola (who did not return after a hit to his head) to the trainers, Aaron Hernandez to a jail cell — and the sputtering of the Patriots’ offense is a nearly constant reminder of just how much is missing. But then, Belichick mentioned that in football you have to have a short memory, to keep one bad play from impacting the next.

So there was rookie Aaron Dobson — who dropped the first pass of the game and the fourth-down throw that appeared to doom the Patriots minutes before the winning drive — catching a pass for 6 yards. Then Austin Collie, who signed with the Patriots less than two weeks ago after looking for a job for months, caught a 9-yard pass on fourth down that kept New England alive. When Thompkins — a rookie who might have been an afterthought if Gronkowski and Amendola had been healthy and on the field together — slipped behind a Saints defender and headed for the back left corner of the end zone, Brady put the pass right on his fingertips.

“I have confidence in those guys,” Brady said. “We’re just working hard every day to try to get better. We’re certainly not perfect out there. We’re definitely just grinding. We’re just trying to get better every day in practice and every game. These situations that come up and we’re learning from them.”

It’s still taking some getting used to. At least half the fans who packed Gillette Stadium flooded the exits after Belichick curiously tried to convert on fourth-and-6 from his own 24-yard line when the Saints led by only one.

Hard to blame them. It’s been a while since they’ve had a defense that can hold off an elite offense on three straight plays. Belichick often talks about playing complementary football, and Brady echoed the necessity for it this week. After so many years of relying on Brady, sometimes to the exclusion of everything else, the Patriots are leaning hard on the rest of their team, while the passing game that has defined their Super Bowl era is remade on the fly. Defensive players would not agree Sunday, but this — keeping a top-flight offense at bay while their own offense is struggling — was an important moment for them. They held Brees to just 17 completions, his season low by nine.

It can be jarring to see New England cobble together victories like this, particularly because the injuries keep coming, including those to Talib, Amendola and Jerod Mayo on Sunday. Because the Patriots wind up in the playoffs nearly every year, it is tempting to judge them by how they stack up against the best teams in the league week by week. At this point, without Gronkowski and Amendola, this offense would struggle to stay with the Denver Broncos. But the Patriots do not need the offense to be operating at its usual level right now. They’ll need that in December and January.

And after watching Brady recover from one of his worst games (a Week 5 loss to the Cincinnati Bengals) to pull one more victory off the trash heap, is there any doubt the Patriots will be a factor in January?

It is. And he’s enough for now.