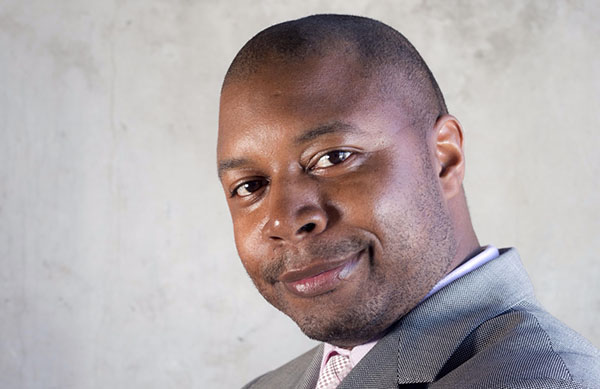 Morgan will take the experience of his 21 years to the Lula Lounge on Wednesday, 13 August 2014, in a celebratory show labelled, “DMXXI: The Dwayne Morgan 21 Year Anniversary”.

As a social entrepreneur, Morgan says he has gone about, “Building a business around people and the engagement and empowerment of people.”

When asked by Pride News what was the secret to his longevity, the soft-spoken wordsmith responded simply: “Perseverance, pushing the envelope, resisting the urge to be comfortable, not being afraid to speak about things whether they be popular or not.”

To that end, Morgan says those in attendance can expect pieces that are, “political, social, sexual and inspirational.” The evening promises to span the breath of his storied career

His career began in 1993 as a spoken word artist and founded, “Up From The Roots” a place where the contributions of positively influenced artists of African-Canadian and urban achievements could be promoted.

Morgan has published six books, recorded five albums, produced over 100 events, including The International Poetry Slam, and has hosted two spoken word concerts. Among his productions, Morgan created and performed a 10 minute film “Three Knocks”, based on his poem of the same name, which addresses issues of domestic violence.

The versatile poet’s genre ranges from erotica to social commentary—and everything in-between. When his pieces are shared with his audience, it doesn’t take long for one to understand his passion for what he does. Though his accolades are many and his praise is warranted, Morgan remains humble and soft-spoken.

An African Canadian Achievement Award recipient, the Writers’ Union of Canada member has also received the Harry Jerome Award for Excellence in Arts, three Canadian Urban music awards, and has been recognized on the official Black History Month Poster.

Along with myriad venues across Canada, the man synonymous with the art that is Spoken Word has graced stages in the United States, Jamaica, Barbados, and various countries throughout Europe. With a repertoire spanning over He has performed for Canada’s former Governor General, Michaëlle Jean. Recognized as Poet of Honour at the Canadian Festival of Spoken Word in Vancouver, Morgan has been featured on CBC’s news, TSN’s “Off the Record”, Much Music’s “Damix”, and “Rap city”. He has been the opening act for spoken word artist Mutabaruka, singers Deborah Cox and Alicia Keys and has recorded with Canadian artist Drake.

As a motivational speaker Morgan has been to schools to read and speak to children about who they are and who they can strive to become. Accepted and welcomed wherever he goes, he gives voice and feelings to the otherwise voiceless and hard hearted. Whether you are a poet, burgeoning writer, or general member of the public, his verses pen an indelible mark upon your consciousness.

Advance tickets are $20 ($25 at the door) and available through info@dwaynemorgan.ca along with Play De Record, A Different Booklist, and Knowledge Bookstore in Brampton.

Ava Tenn contributed to this article.