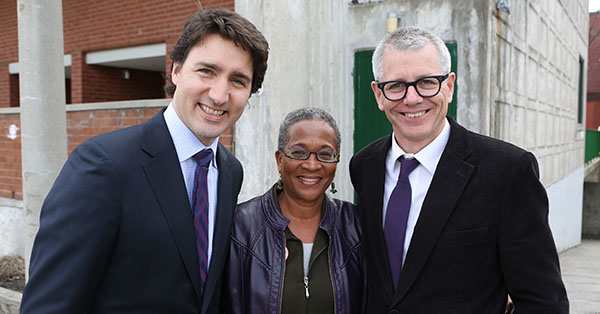 Photo above is of Federal Liberal Leader, Justin Trudeau, seen at the Alexandra Park Housing Development in the riding of Trinity-Spadina with its MP, Adam Vaughan, and Joan Pierre, who worked on Vaughan’s recent successful campaign.

TORONTO, Ontario – Artistic and creative director, Joan Pierre, is excited that her Cuttin’ Style Caribbean, “a series of exceptional, sophisticated Caribbean-themed events,” has been commissioned by the organizers of the 2015 Pan Am and Parapan Am Games to be part of PANAMANIA, the arts and culture program of the Games.

Pierre said the organizers spoke to her two-and-a-half years ago and invited her to submit some proposals on anything that she thought would enhance the cultural side of Caribbean people.

She agreed and sent in three ideas – one of them fashion-related — to Don Shipley, the creative director of arts and culture, festivals for the TORONTO 2015 Pan Am/Parapan Am Games Organizing Committee (TO2015).

Over the last six years, Pierre has organized three Caribbean fashion shows in Toronto, which were all successful.

“Of course having done that, I said, well, its Caribbean, they have different islands taking part in the Games so that’s it. It was just one of three proposals and they picked it. They’re the ones who picked it, not me,” said Pierre who has a multi-faceted career, encompassing consulting in the public and private sectors; producer, event planning, production and stage management; marketing and communications; artistic and creative direction.

She will produce a series of highly original fashion-oriented events aimed at showcasing the sophistication and refinement of “island wear” and Caribbean fashion from July 16-18, 2015.

“We will create a new exciting way of exploring and celebrating the many gifts of the people of the Caribbean, through fashion.  Millions will experience a unique perspective – the most exquisite side and the finest expression of Caribbean elegance.  Also, we will engage the Caribbean design, fashion and business communities in a productive way and advance cultural awareness of the Caribbean countries,” said Pierre in the project description.

TORONTO 2015 and its Arts and Culture team created a commission fund to seed new and innovative arts and arts-legacy projects related to the TORONTO 2015 Pan and Parapan American Games.

“These are unique and innovative artistic concepts that align with the TORONTO 2015 mandate and ultimately enhance the cultural fabric of both the Greater Golden Horseshoe region and the TORONTO 2015 Pan and Parapan Am Games experience. More than 25 exciting projects have been selected,” notes TO2015 on its website.

The only other project commissioned in the fashion category is one by the Design Exchange, Canada’s Design Museum.

After her Cuttin’ Style Caribbean idea was approved, she sent in a budget for one show and the organizers surprised her by asking her to do three shows – one indoor and two outside by the lake.

She had only pitched for the show to be done inside so now with the number multiplied by three, she submitted another budget, which was accepted and she was commissioned to produce them. 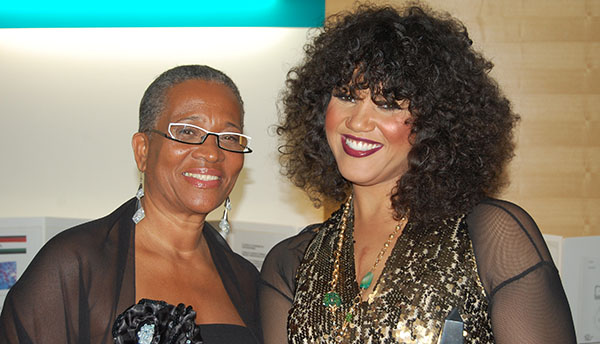 The veteran producer is no stranger to planning or managing international events. She has played a leadership role in the design, planning and implementation of events such as Caribana, the African Heritage Music Festival (New Orleans), University of Toronto Faculty of Law 50th reunion, Afro Anglican Conference, Ethnic Studies Conference at York University; and several fashion shows.

She has been the event production manager of the African Canadian Achievement Awards (ACAA) since 1995, and is currently the organization’s President and Executive Producer.

Pierre has been engaging the Caribbean region by touching base with government agencies of the different islands.

She has what she calls ‘foot soldiers’ in Trinidad & Tobago, St. Lucia, Antigua, Barbados, Guyana, Jamaica, and possibly Haiti.

“I have connections in every one of the islands so I go to them and have them connect me to the right people once they believe in the project. The other advantage I have, my creative director is Richard Young. He has done my last three shows in Toronto. He is one person in the Caribbean that all the islands use to put on their fashion shows. He is connected to the fashion industry right through the Caribbean.”

Pierre also works with the consulates in Toronto who are aware of what she is doing and lending her whatever support they can to make those connections so that she can get the support from the islands.

She said now she can bring that gem to Canada and let the people here see, not just Canadians but international media and Commonwealth dignitaries who will be here for the Games.

The two outside shows will be free to the public and held at the H2O Beach by the waterfront but the indoor gala at the Westin Harbour Castle Hotel will be a paid event featuring top designers.

Pierre said she would be inviting boutique owners to attend the gala because the designers out of the Caribbean are boutique designers. They don’t usually do mass production although if they got such a request they could produce it. Four or five pieces of the same design is all that they usually make.

“The key thing is to have those boutique designers in the room to see the level of craftsmanship, the level of uniqueness, the level of what makes the Caribbean designers different to the other designers in North America or even Europe,” said Pierre who has been wearing their clothes for the last 25 years.

She describes their clothes as being different, classy and speaking to her personally.

“Why I find their creations are so different and why I enjoy wearing them is the fact that because they are so mixed in cultures. We have Africa, we have China, we have India, we have European; we have everybody as a melting pot in the Caribbean, particularly Trinidad.”

Pierre said as a result of that the designers mix all those cultures and colours in their clothes.

She noted that if one were to walk through a mall now, it would be dull; everything is black, grey, dark brown, dark blue in the stores as they prepare for the winter season.

She does not ascribe to the belief of wearing dark clothes for the winter but thinks colours can be worn all year round.

Pierre recently visited a hummingbird sanctuary in Trinidad where the owner had thirteen different species.

“The colours, the combination of colours on a hummingbird is just stunning and the colours work. You could see the creative people who live there, that’s what they’re seeing so it’s easy for them to pick up on those colours and put them together.”

She noted that the creation of the design comes out of many different ethnic groups.

The well-known event planner has set the end of November as the deadline for sponsorship support from the different countries which are all setting their budgets for 2015 now.

In many of these countries, the tourism, culture and sports departments will be involved in sponsorship of her event, given the nature of the Games.

Pierre also said she has the support of all the Caribbean consulates which will share information about Cuttin’ Style Caribbean with their specific communities here.

The marketing company for the event, David Wilkinson Group, is Canadian but based in LA.

Pierre spent 12 years at Bell Canada in supervisory and management positions, and has also developed a certificate program in event planning and event management for the Continuing Education Division at York University in Toronto.

She holds a Diploma in Production/Stage Management, Television Arts, from Ryerson University.