Celebrate The Holiday Season With The Soweto Gospel Choir

A perennial favourite — described by JazzTimes Montreal in 2013 as “….nothing less than an international treasure; you simply can’t fake the type of joy that the singers pour into the music” — the Soweto Gospel Choir returns to Toronto; this time with its all-new holiday-themed “Celebrate!” tour.

For more than a decade, this internationally acclaimed South African gospel choir has brought joy into the lives and hearts of citizens all over the world.

Now, Torontonians have a chance to celebrate alongside the award-winning choir, as its singers give voice to, both the beautiful African gospel music they are known for jubilantly performing, as well as holiday favourites, such as “Oh! Holy Night” and “Little Drummer Boy”.

Based on a review of the impactful Choir’s performance in Carolina, in 2012, by Classical Voice magazine — “Presenting grace of form and grace of God in one program is a tall order but the choir pulled it off to perfection. The costumes were brilliant, the songs powerful, the sound heavenly, and the dancing exuberant” —  the Soweto Gospel Choir’s “Celebrate!” tour should be a must-see holiday event for friends and families alike.

Heralded as “absolutely thrilling” by Billboard Music, the 20-plus strong choir, under the direction of Bryer, draws on the best talent from the many churches in, and around, the South Western Townships of Johannesburg in Gauteng, South Africa.

The group performed at the first of the 46664 concerts in the early 2000s — a series of AIDS charity concerts played in honour of Nelson Mandela — and has since toured internationally several times. 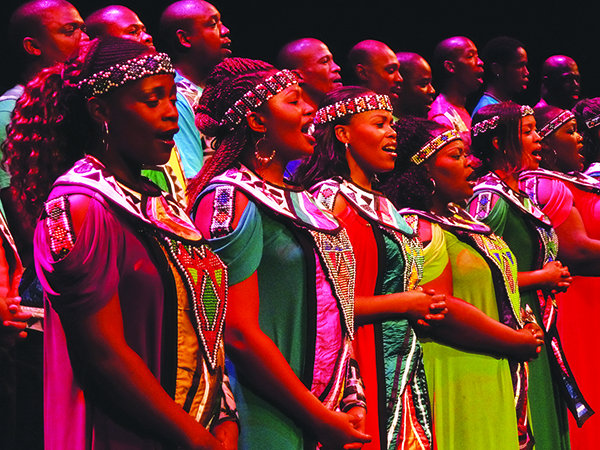 In 2009 the Soweto Gospel Choir performed its Oscar-nominated “Down to Earth,” with Peter Gabriel on the Academy Awards broadcast, the first South African artists to ever do so.

In December 2013, the Choir partnered with Woolworths to support the ‘Operation Smile South Africa’ Christmas campaign.

The Choir had planned a flash mob performance of James Brown’s “I Feel Good” at a Woolworths store in Pretoria, South Africa, but after the passing of their spiritual father Nelson Mandela, they chose to sing Johnny Clegg’s beautifully haunting “Asimbonanga” in tribute to Madiba’s passing.

The Youtube video of the event quickly went viral and currently has over 5-million views.

Throughout September and early-October of this year, the Soweto Gospel Choir performed with international superstar singer, clothing designer and activist, Pharrell Williams, as a part of Woolworths’ “Are You With Us” campaign, aiming to improve education, raise environmental awareness and promote social cohesion across South Africa.

The Choir continues to inspire individuals thorough their powerful gospel music and high involvement in international charities–including their own AIDS orphans foundation Nkosi’s Haven Vukani–for which they have raised over $1,500,000.00 USD. 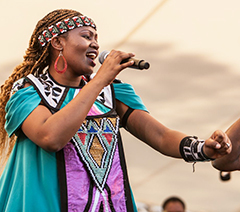 International media have taken notice of, and been enthralled by, the Choir’s inspiring, flawless and riveting performances:

Manchester News opined, “Occasionally, a diamond of such brilliance is unearthed that you find yourself compelled to develop a near-fanatical enthusiasm for it”;

“There is simply no flaw here”, said Scotland’s Evening News;

Melbourne, Australia’s Australian Stage, gushes, “This is a tour de musical force….Soweto Gospel Choir is a slice of musical heaven”;

“The crowd was held in sway by the sheen and spectacle of a masterful performance,” said Seattle News;

“Meticulous and unstoppable…spirited and spectacular,” added The New York Times;

A review in Edinburgh, Scotland’s Three Weeks, said, “I was left awestruck by the choir’s majestic and moving performance. There is no equal to their passion and power”;

And the music industry’s pre-eminent publication, Billboard, raved about the Choir, “These absolutely thrilling singers need nothing but their voices to make dazzling music.”

Presented by the Sony Centre for the Performing Arts, the Soweto Gospel Choir – “Celebrate!” tour takes place at the theatre’s venue on Friday, December 4, at 7:30PM.