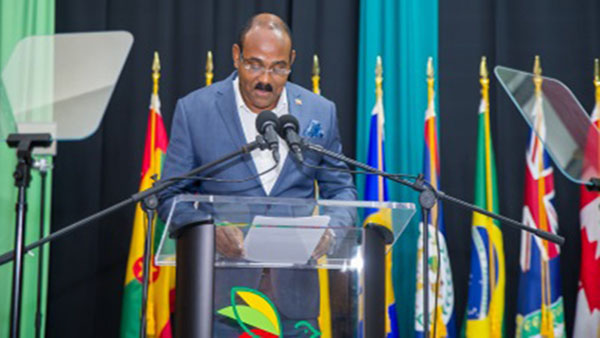 Antigua and Barbuda Prime Minister, Gaston Browne, in an address yesterday, said "Some (Caribbean) governments, find every reason why they ought not to contribute" to LIAT's viability.

ST. GEORGE’S, Grenada, May 31, 2018 (CMC) – The Antigua and Barbuda government, yesterday, urged regional governments to provide a subvention to the cash-strapped regional airline, LIAT, so as to ensure its future viability.

Prime Minister Gaston Browne, addressing a seminar on “Air Transport Competitiveness and Connectivity”, told delegates that the time has come for the Antigua-based airline to receive a subvention from the governments of the sub-regional Organisation of Eastern Caribbean States (OECS) and Barbados.

“In essence, LIAT needs fresh cash,” he told the seminar, which forms part of the 48th annual general meeting of the board of governors of the Barbados-based Caribbean Development Bank (CDB) that ended here, today.

“We have to see subsidising as an investment, an investment in the region to ensure the integration process works,” Browne said, while pointing out that, in other regions of the world, some airlines are profitable because of subvention from the state.

LIAT’s main shareholders are the governments of Antigua and Barbuda, Barbados, Dominica and St. Vincent and the Grenadines. Other regional governments have, in the past, been reluctant to provide funds to the airline that operates a schedule, serving 17 destinations in the Caribbean.

The airline has, in the past, hinted at cutting services to some of the unprofitable routes.

In his address, Browne, in providing justification for what he describes as a solution to the LIAT problem, said that the airline should receive the same courtesy that other international airlines receive, when they decide to put some destinations on their routes, on behalf of some Caribbean states.

“I find it extremely interesting that our governments will contribute to campaigns of other airlines, in millions of dollars, but not in an institution, such as LIAT, which is so critical for its role in our economic sustainability. Some governments, find every reason why they ought not to contribute,” he said.

“When we look at other countries, some airlines are profitable, but they are subsidised by the state. We should all come together and provide some subvention for LIAT, that structure itself, will render LIAT more profitable,” he added.

Browne also proposed a reduction and, or, complete removal of airport taxes, because he said it is hindering travel within the islands.

“The size of the market of the region is small, we have small populations, and these taxes increase costs, and so, if a reliable air transport is essential to Caribbean economies, we need to encourage more movement, by reducing on the cost of travel,” he said.

“The time has come for us to reform and be proactive in our strategies. We have hurt ourselves by introducing all these travel taxes,” Browne told the meeting.