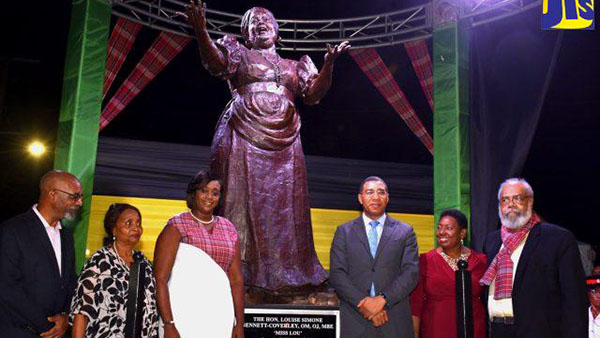 Born in Jamaica, on September 7, 1919, Bennett-Coverley — who was conferred with an Honourary Doctor of Letters from York University, in 1988 — lived the last decade of her life in Scarborough, Ontario, and died on July 27, 2006, at the Scarborough Grace Hospital, after collapsing at her home.

A memorial service was held in Toronto on August 3, 2006, after which her body was flown to Jamaica to lie in state at the National Arena, on August 7 and 8. A funeral was held in Kingston, at the Coke Methodist Church and she was buried at National Heroes Park, in a section reserved for cultural icons.

An African Canadian Achievement Award of Excellence’s Lifetime Achievement Award recipient, Coverley-Bennett was memmorialised in Toronto, with Harbourfront Centre, a non-profit cultural organisation, naming a venue, in her  honour, as the Miss Lou Room.

Jamaica Prime Minister, Andrew Holness, removed the covering to reveal the statue, done by noted sculptor, Basil Watson, which depicts Miss Lou’s expressive face and her arms outstretched, appearing to have frozen her in time as she performed one of her many cultural pieces on stage.

The unveiling of the monument brought a climatic end to an evening filled with glowing tributes to Miss Lou in song, dance, poetry and personal reflections. The event coincided with the 99th anniversary of the birth of the late cultural ambassador, who was an acclaimed writer, poet, folklorist, educator and radio and television personality.

The Prime Minister described Ms. Lou as an outstanding Jamaican, “who proudly and without reservation, put our rich cultural heritage on display for the world to see and admire”.

“What Miss Lou did, is that she was the first Jamaican to bring our language on the world stage,” he said, noting that she popularised the Jamaican dialect.

Holness pointed out that she was one of the first Jamaicans to be employed to the British Broadcasting Corporation (BBC), and she used that platform to bring Jamaican expression to the world.

“She was able to do it by also mastering the English language, so she was a perfect ambassador,” he said.

The Prime Minister noted that with the installation of the statue in Gordon Town, where Miss Lou called home for most of her life, the area will now have even greater cultural value and will be ideal for community tourism.

“Very soon we will be making Kingston a port of call for cruise shipping. We will be returning cruise ships to Port Royal and to Victoria Pier….and the tourists will want to not just come and see the Bob Marley statue and (visit) the Institute of Jamaica (IOJ) and all the other places, but they are going to come right here in Gordon Town,” he said.

The installation of the statue is part of the government’s plan to upgrade Gordon Town Square and transform it into the Miss Lou Square by the 100th anniversary of her birth, next year.

“I am very happy that the Kingston and St. Andrew Municipal Corporation (KSAMC) will be making the appropriate changes to uplift the built environment in the area,” Holness said.

Minister of Culture, Gender, Entertainment and Sport, Olivia Grange, who was integral to the project’s completion, said the statue pays homage to a woman, who represents the best of the Jamaican people and culture.

“It is a great joy for me to see this woman, who so many Jamaicans see as mother, being elevated, both physically and psychologically, in the minds of the Jamaican social and cultural landscape,” she said.

“Miss Lou now has a statue to celebrate her, and those who pass by, will look up to her for inspiration and encouragement, as we continue our efforts to achieve sustainable prosperity for our people,” she added.

Known for writing and performing her poems, folk songs and stories in Jamaican patois, Miss Lou is regarded by many as the “mother of Jamaican culture”.

During the 1930’s, she wrote and recited dialect poems and, in 1942, she published her first poetry collection, “Dialect Verses”.

After graduating from the Royal Academy of Dramatic Art in London, she hosted the BBC radio shows Caribbean Carnival and West Indian Night. She later taught folklore and drama at the University of the West Indies (UWI) and served as director of the Jamaican Social Welfare Commission from 1959 to 1963.

Notable among her many publications is “Jamaica Labrish”, a collection of folklore and poetry, which was published in 1966. Among the albums she recorded were “Jamaican Folk Songs” in 1954 and “Children’s Jamaican Songs and Games” in 1957.

In recognition of her outstanding work, Miss Lou was bestowed with the Order of Jamaica in 1974 and the Order of Merit in 2001.

She also received Honorary Doctor of Letters from UWI in 1983.

Other stakeholders in the mounting of the statue include Mayor of Kingston, Senator Councillor Delroy Williams; Member of Parliament for East Rural St. Andrew, and wife of the Prime Minister, Juliet Holness; the IOJ; Miss Lou’s estate; residents of Gordon Town; and the Jamaican Diaspora, particularly in Canada.