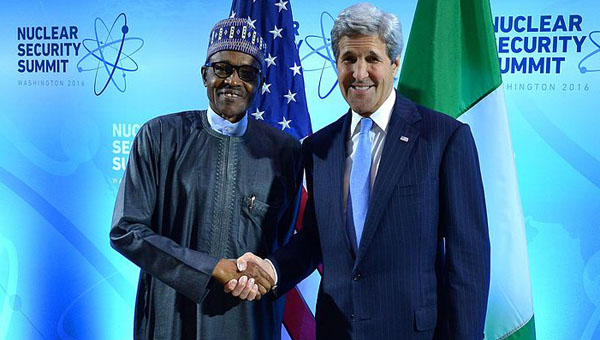 Nigerian President, Muhammadu Buhari, poses for a photo with former US Secretary of State, John Kerry, on March 31, at the 2016 Nuclear Security Summit in Washington, D.C.. Photo by U.S. Department of State from United States -- Public Domain, https://commons.wikimedia.org/w/index.php?curid=47898370.

Nigerian Elections: Why Poor Economic Performance Is Front And Centre

On February 23, more than 84 million eligible voters in Nigeria go to the polls to elect the next president of the country and members of the national assembly. There are nearly 80 candidates competing for the country’s top job but the contest can be viewed to be mainly between the incumbent president, Muhammadu Buhari, aged 76, of the ruling All Progressive Congress (APC) and the former vice president, Atiku Abubakar, aged 72, of the People’s Democratic Party.

Buhari, a former military head of state from 1983 to 1985, was re-elected as a civilian president in 2015 and is campaigning for another four years at the helm. He has vowed to expunge the country of corruption, while Abubakar, who was the vice president from 1999 to 2007, is campaigning on the promise to get Nigeria “working again”.

Indeed, Nigeria is in dire need of all that has been promised. But given the past records of the two main candidates, it would be near delusional to hope for meaningful change if they are re-elected.

Buhari’s handling of the economy has been somewhere between poor and appalling. The same could be said of past administrations, including when Atiku was vice president from 1999 to 2007.

Nigeria is Africa’s most populous country, with more than 198m people. It is also the continent’s largest economy, with a GDP in 2017 of US$376 billion. It holds the world’s tenth-largest gas reserves and eleventh-largest oil reserves – some 37 billion barrels, as of 2017.

Despite this abundance of natural and human resources, the country’s development indicators are nothing to write home about. As I document in my book, Nigeria’s economy faces a number of challenges.

Serious under-performer
Over 75% of Nigeria’s population lives below the US$3.20-a-day poverty line and more than half of the population is multi-dimensionally poor – they are deprived of access to basic health, education and standards of living. What’s more, the inequality gap in the country has widened over recent years, with the top 10% sharing more than 40% of the national income and the bottom 20% living on less than 5% of the national income. According to Oxfam, Nigeria has the unenviable distinction of being at the bottom of the commitment to reducing inequality index (CRI) since 2017.

Its record on social spending (on health, education and social protection) is also abysmal. One in 10 children in the country does not reach their fifth birthday, and more than 10m children do not go to school. Of these, 60% are girls. Average life expectancy at birth in Nigeria is around 52 years, which is significantly lower than the sub-Saharan African region’s average of 62 years.

The country’s infrastructures are in a very sorry state. More than two thirds of the population does not have access to constant electricity, safe water and good sanitation. The roads and transport facilities are in poor condition despite the billions of dollars budgeted for their construction and maintenance. 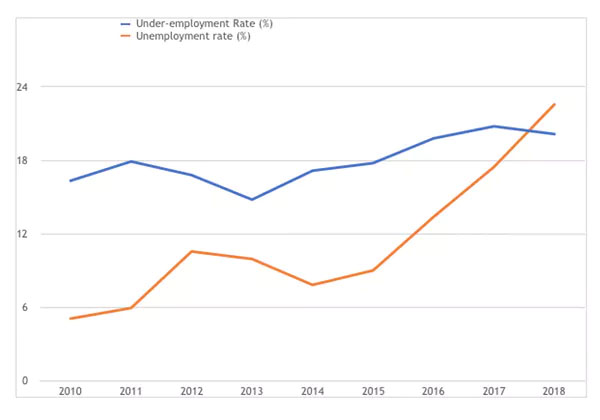 The implications of this infrastructural inadequacy and insecurity is the decline of investment in the economy, which then results in high unemployment and underemployment. The inadequate provision of basic infrastructure means that private companies have to take on these costs, making it more expensive for them to do business in Nigeria. Plus, weak institutions, in the form of weak rule of law and poor quality regulations, also contribute to the increase in the cost of production.

These inadequacies, together with fierce competition from low-cost production from abroad (China especially) and low domestic-demand for locally manufactured goods (due to the high poverty rate), all contribute to undermining the viability of any productive process in the country. The result is an under-performing economy that is overly-reliant on its oil and mineral wealth to prop up its GDP – but this does not benefit a large proportion of the population.

Road to recovery?
To solve this, whoever wins the Nigerian elections desperately needs an ambitious industrial policy. The country has huge economic potential that can be met if governed well. The state needs to play a strategic role in the development process, beyond just providing the right infrastructure and a conducive environment. Right now the economy is far too dependent on exporting oil and other minerals. Emphasis needs to shift to fostering knowledge-based, high-tech economy. 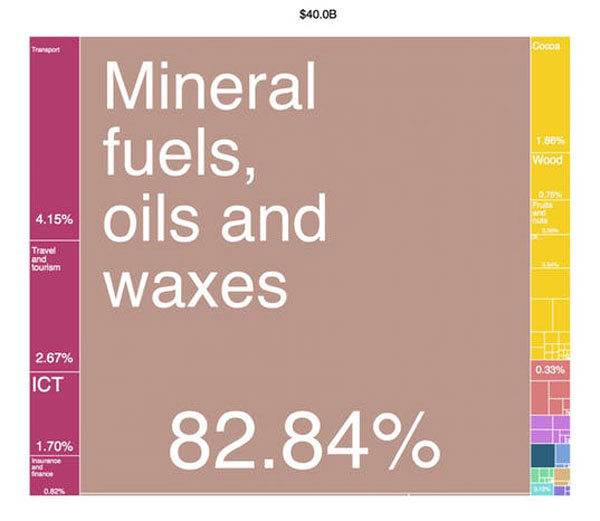 Nigeria’s exports in 2016. “The Atlas of Economic Complexity,” Center for International Development at Harvard University, CC BY.

Indonesia, for example, is at a similar level of development to Nigeria and is similarly rich in natural resources. But, as the graph below shows, it has a much more diverse economy. 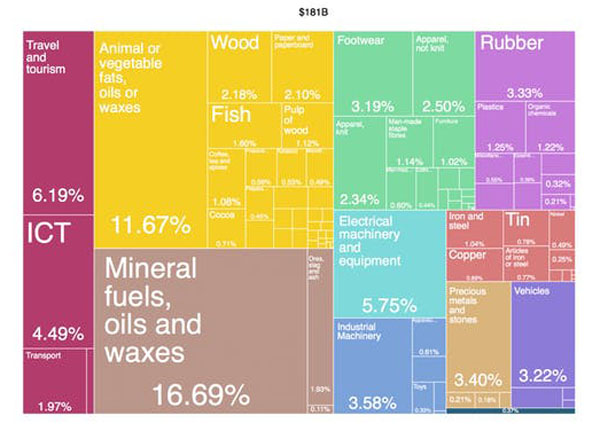 Indonesia’s exports 2016. “The Atlas of Economic Complexity,” Center for International Development at Harvard University, CC BY.

The next Nigerian government must follow the lead of many developed and emerging countries in funding research and development (R&D) activities that drive innovation. The current lack of R&D and innovation is one of the main reasons the country is still struggling to achieve any meaningful development. Lastly, the state also needs to create an environment that attracts, grows and retains talent. This means developing its dilapidated education and health infrastructure and creating institutions that recognise and reward talent.

And, amid all this, corruption must be tackled. Like a cankerworm, it has gnawed at Nigeria for so long and has also contributed significantly to its persistent underdevelopment. If Nigeria is to make any meaningful inroad towards development, more also needs to be done in the fight against graft. Buhari’s efforts on this front have been seen by his critics as selective. And Atiku, on the other hand, has been accused by his detractors as a ruthless businessman-politician who has milked the system for decades. So, Nigeria’s voters face two uninspiring choices in the coming election.

Ejike Bob Udeogu is Senior Lecturer in Economics at the University of East London.