New in Pride
Home / Arts & Entertainment / Multi-Award-Winning Novelist, Andrea Levy: Her Important Body Of Work Set Out What It Is To Be Black And British 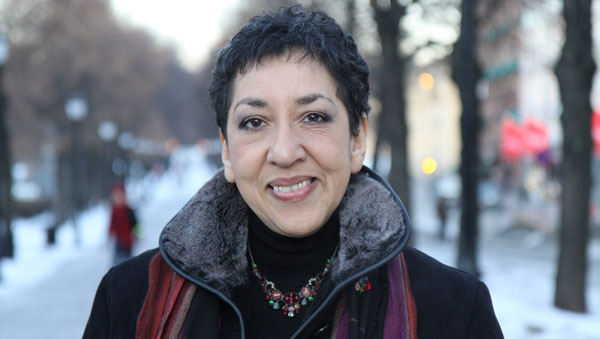 Born to Jamaican parents in England, prize-winning author, the late Andrea Levy, who was born on March 7, 1956 and died from cancer, last month at 62, was a strong voice for the Caribbean Diaspora. Photo courtesy of andrealevy.com.

Multi-Award-Winning Novelist, Andrea Levy: Her Important Body Of Work Set Out What It Is To Be Black And British

Prize-winning British novelist Andrea Levy, who died on February 14, will be remembered affectionately for raising awareness of black British writing and the closely intertwined histories of Britain and the Caribbean more than any other British writer of recent times (save perhaps Zadie Smith). In a career spanning 25 years, during which she published five novels (two of which were successfully adapted for television) and a luminous collection of short stories and essays – a significant legacy in itself – Levy garnered an unusually wide readership which crossed literary, popular and academic lines.

Like Angela, the protagonist of her first, semi-autobiographical novel, Every Light in the House Burnin’ (1994), Levy was of Jamaican parentage, her father being one of the original Windrush passengers arriving in Britain in 1948, her mother following shortly after. Levy herself grew up in a working-class household with few books, recalling in characteristically frank terms that “being a working-class girl I mainly watched telly”.

Like Faith, the protagonist of her third novel, Fruit of the Lemon (1999), Levy knew little about her heritage and took little interest in Caribbean history and culture until a startling experience in a Racism Awareness training session at work launched her on a journey of rediscovery. As Faith’s mother says: “Child, everyone should know where they come from.”

Levy’s meticulously researched fictions interrogate the human experience of migration to and from the Caribbean in different periods. In Small Island (2004), Levy explores the ways in which Caribbean people were racially “othered” and made to feel unwelcome outsiders in Britain, despite being invited to migrate as British subjects in the post-1945 period.

In her final novel, The Long Song (2010), Levy harnesses fiction to, in her words, “go farther” – imaginatively excavating the human experiences of slavery from a variety of perspectives. Later on, in a twist stranger than fiction, Levy discovered that she herself, like her fictional character Miss July, was descended from a mixed-race liaison between a slave and a white overseer.

Although happy to be termed a black British writer, Levy importantly always saw the long historical connection between Britain and the Caribbean as a profoundly British concern, rather than a niche interest only relevant to those of Caribbean heritage. Indeed, reading her nuanced and inclusive explorations of what it is to be British and of Caribbean heritage might be seen as more urgent than ever in these heated times of Brexit and the Windrush scandal.

A British story
Levy started to write only in her 30s – but her writing achieved that rare thing: critical acclaim and commercial success (notably after Small Island which won the Orange Prize for Fiction, the Whitbread Book of the Year and the Commonwealth Writers’ Prize). Her texts now have a place on academic curricula across the globe but also – crucially – a huge popular readership as her books fill a permanent place on ordinary peoples’ bookshelves.

As the many tributes from her readers, those who worked with her and from prominent black British figures such as Sir Lenny Henry testify, it is clear that Levy’s writing played a hugely important role in helping many readers learn about, connect to and make sense of the complex, brutal and often hidden nature of Britain’s slave history and its lasting legacies. As Levy always made clear: the history of her heritage was also a British story.

Small Island is Levy’s hugely significant contribution to the fictional retelling and exploration of West Indians’ migration to Britain in the Windrush era. Levy’s compelling neo-slave novel, The Long Song, is a historiographic metafiction, a playfully self-conscious probing of the nature of narrative and the telling of history, this time from a slave perspective in an attempt to imaginatively reenter the harsh world of plantation society and give voice, agency and humanity to the enslaved.

Levy’s earliest novels, Every Light in the House Burning (1994), set in 1960s London; Never far from Nowhere (1996), set on a North London council estate in the 1970s; and Fruit of the Lemon (1999), set in the Thatcherite Britain of the 1980s (as well as Jamaica), document domestic experiences of black British life and the particular manifestations of racism – National Front attacks, skinhead violence – prominent in British society during these periods. Later short texts, such as the short story Uriah’s War (2014), return to an earlier period and remind us that Britain and the Caribbean have long been closely connected and that West Indians – as British colonial subjects – also fought valiantly for “King and Country” in both world wars.

Growing up Black
Levy seems to have been driven by a strong ethical imperative to tell these stories of West Indian arrival in Britain, of later generations “growing up black under the Union Jack”, to address the widespread British amnesia about its colonial history and the relative silence about Caribbean slavery in so many British institutions, including the school system.

The Small Island of Levy’s title is, of course, both Jamaica and Britain, two islands intimately and often violently yoked together by more than 300 years of shared history and culture. While Levy’s novels are set during different periods, they are all part of a longstanding, shared British-Caribbean history.

Thus, Small Island shows how the experience of the Windrush generation was marked by many of the same attitudes, inequalities and tensions found in the earlier period of plantation slavery in Jamaica, as explored in The Long Song. Levy’s 2014 essay Back to My Own Country, meanwhile, is a moving and powerful account of family, racism and her turn to writing. All are part of the largely forgotten history of Britain’s deep relationship with the Caribbean – a history which Levy’s texts show us is not just “out there” but “here (in Britain) too”.

Ultimately, what links all Levy’s texts is their deep humanity. Fittingly, Levy herself said that: “None of my books is just about race … They’re about people and history.” She described Miss July, the protagonist and chief narrator of The Long Song as “human, very smart, feisty”. There could be no better way of describing Levy as a writer.