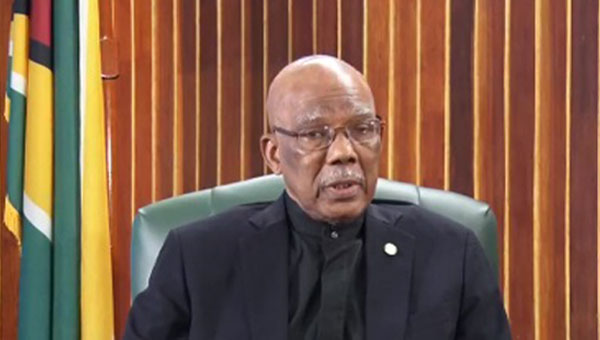 TORONTO, Ontario March 21, 2019 — The Canadian chapter of the Association of Concerned Guyanese (ACG-Canada) — an affiliate of Guyana’s main opposition, the Peoples’ Progressive Party-Civic (PPP-C) — is calling on compatriots to join the organisation in a protest, in front of the Guyana Consulate office building, tomorrow.

In an advertising flyer, headlined “PROTEST! PROTEST! PROTEST!: In Solidarity with the People of Guyana against Dictatorship”, the ACG-Canada explains that it is “holding a Day of Protest, in support of the Guyanese people and their demands that the illegal and dictatorial APNU+AFC regime respect the Constitution of Guyana and resign now”.

The organisation is also calling on the David Granger-headed administration to announce new General Elections immediately.

The Secretary General of the PPP-C and Opposition Leader, Bharrat Jagdeo, has consistently called on the president to call the elections by today, March 21, after which, he has said the government will be “illegal”.

Tomorrow, Friday, March 22, is a day after the expiration of the Constitutionally-mandated 90-day period, in which elections should have been held in Guyana, due to the successful passage of the No-confidence Motion in December, last year.

President Granger has refused to call elections, before the deadline today, claiming that he has to wait on the Guyana Elections Commission (GECOM) to advise when it could administer the polls.

On Tuesday, GECOM Chair, retired Justice James Patterson, said that fresh regional and general elections could only be held in Guyana, in “late November”.

In a letter to President Granger, the GECOM chairman wrote that “I would proffer that the Commission would be in a position to conduct General and Regional Elections, no earlier than late November, with an Official List of Electors having a qualifying date of 31st October 2019.”

Earlier this week, Jagdeo announced that the PPP-C plans to stage organised protest actions across the country, emphasising that the protests will be peaceful.

“We are very different from the PNC (People’s National Congress). We will not burn a single building in the city, as they did or anywhere in the country. We will not damage public infrastructure. We will not beat people on the streets or harass them. We will not do anything that will harm our public servants, policemen and women, soldiers, doctors, teachers from going about their daily business,” he explained.

The Opposition Leader elaborated: “Our target will be narrowly focused on the illegal President, illegal Prime Minister, and the illegal Ministers. That is where we would focus on. Not to pursue violence against them, but to make life very uncomfortable for them, who have been occupying offices illegally and violating the Constitution…Who now, for their own self-interest, will push our country into a crisis, which may have implications for territorial integrity, putting our country at risk, because you want to hang on to power.”

The location of the ACG-Canada protest will be held at the Guyana Consulate Office, 505 Consumers Road, in Toronto, Ontario, from 3:00 P.M. to 5:00 P.M.

In the flyer, the organisation noted, “We assemble at 2:30 PM and protest begins at 3:00 PM”, encouraging those planning to attend, to invite family and friends, “to come out and participate in this show of support of our fellow Guyanese back home”.