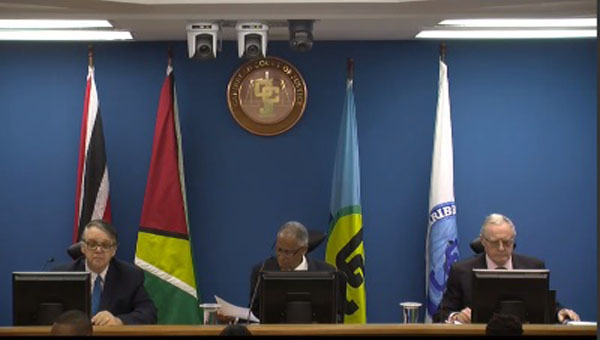 PORT OF SPAIN, Trinidad and Tobago, March 29, 2019 (CMC) – The Trinidad and Tobago-based Caribbean Court of Justice (CCJ), today, set May 10, to hear the two appeals — filed by Opposition Leader, Bharrat Jagdeo, and Christopher Ram, a lawyer and accountant — regarding the ruling of the Court of Appeal in Guyana, which invalidated a motion of no confidence that had passed, successfully, in the National Assembly, on December 21, last year.

“This matter is urgent and should be treated as such and, therefore, the timelines, set out in the rules, should be abridged,” CCJ President, Justice Adrian Saunders, told a case management conference that started at 11AM today.

“We have ordered that the matters be consolidated. We have granted special leave to appeal in each of the cases. We have given leave to the Attorney General to file any cross appeal that he wishes to file, by Monday April 8, or any other respondent, who wishes to file a cross appeal,” the three-member CCJ panel said.

In addition, the CCJ ordered that the Guyana Elections Commission (GECOM) “be joined, as a party” and that the notices of appeal be filed by Monday April 1.

The CCJ, which is Guyana’s highest court, also ordered that the notices of appeal be served “forthwith” on GECOM, by the latest April 5, “and similarly the cross appeals, if any, filed by the appellants be served, simultaneously”, on GECOM.

“We have ordered that the matter, the appeal, be heard on the 10th May; that written submissions be filed, by all parties, on the 17th of April; that all parties file replies, if they wish to, by the 23rd of April; (and) a pre-trial hearing be held on the 24th of April,” the CCJ proclaimed.

Apart from Jagdeo’s appeal, the CCJ will also hear the one filed by attorney, Christopher Ram, against the Attorney General, Basil Williams; the Minister of State, Joseph Harmon; and Jagdeo, on the same issue.

The Opposition Leader, through his attorneys, filed the appeal, on Tuesday, asking the regional court to throw out last Friday’s ruling, and restore the validity of the no-confidence motion, against the coalition government.

Attorneys, Kamal Ramkarran and Devindra Kissoon, are asking the CCJ, on behalf of Ram, to agree that the Court of Appeal erred in its ruling that 34 votes were needed to pass the motion, as against the 33, which were obtained in the 65-member National Assembly.

The CCJ said during the pre-trial hearing on April 24, it will address issues, related to the order and length of oral submissions.

“But I must warn that we are trying to discourage duplication, and parties should cooperate with each other, so that you don’t have two parties addressing us on the same points and making the same arguments,” Justice Saunders said.

He said one day has been set aside to hear the matter “and we are going to try to hear it that day”.

Justice Saunders said that he was also urging all lawyers to be present at the CCJ building here rather than rely on making an appearance through video conferencing adding “this is a matter of extreme importance and we can’t afford hitches with the telecommunications….”

The full 7-member panel of CCJ judges are: Justice Adrian Saunders, President, of St. Vincent and the Grenadines; Justice Jacob Wit of the Netherlands; Justice David Hayton of the UK; Justice Andrew Burgess, a native of Barbados; Justice Denys Barrow, a citizen of Belize; Mme. Justice Maureen Rajnauth-Lee, a national of Trinidad and Tobago; and Justice Winston Charles Anderson is a Jamaican.