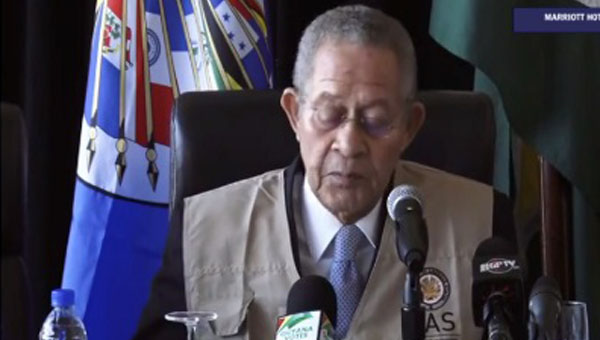 OAS Commends Guyanese Voters For “Strong Democratic Commitment”; But Concerned Over A Number Of Issues

GEORGETOWN, Guyana, March 3, 2020 (CMC) – The Electoral Observation Mission of the Organization of American States (OAS/EOM), today, commended Guyanese voters for “their strong democratic commitment”, which it said was reflected in their peaceful and enthusiastic participation at the regional and general elections, yesterday.

The Guyana Elections Commission (GECOM) is projecting that full preliminary results could be available, by Wednesday, as it blamed a number of factors, including inclement weather in one of the regions, for a further delay in announcing the complete preliminary results.

“We wish to applaud the people of Guyana for their patience, in awaiting the results of the poll, and encourage them to continue doing so. The Mission looks forward to the publication of the official results, at the earliest opportunity,” Head of the OAS/EOM, Bruce Golding, the former Jamaica Prime Minister, said.

He told reporters that in the tabulation of the results, the majority of the stakeholders, with whom the Mission engaged, expressed their concern about the length of time, typically required to tabulate and determine the results of Guyana’s elections.

“The largely-manual tabulation system, coupled with the country’s geography, infrastructure and population distribution, among other factors, can create significant challenges for the organization of elections, and the timely delivery of results,” Golding noted.

He said that the Representation of the People Act allows up to 15 days, after the Election Day, for the declaration of the results of the election.

“However, extended delays by the authorities in publicizing official data, created a window for the insertion of unhelpful speculation and uncertainty in the post-election period,” he stated.

Golding, in presenting the preliminary report of the 17-member team, said that, based on its analysis of the electoral system, as well as the information it has gathered through discussions with national and electoral authorities, political parties, civil society and the international community prior to the elections, and its observations on Election Day, the Mission observed the polarization among the members of the GECOM and the challenges this created, in arriving at consensus, on most issues.

“The divisions appear to exert undue pressure on the Chairperson, and the use of his/her casting vote, to resolve decisions before the Commission,” he said, noting that the OAS/EOM was recommending that “Guyana engage in a multi-stakeholder discussion on the structure of the electoral authority, in order to enhance the deliberative nature and decision-making of the Commission”.

He said that the work of GECOM demonstrates “a strong commitment” to delivering a process that complies with the provisions of the prevailing electoral legislation, and that the activities and processes, observed prior to the election day, including training sessions for poll workers, and the consistently strong performance of those poll workers, are to be commended.

“The Mission however, noted several areas, in which the electoral process and system – and by extension, voters – could benefit from greater agility, and in some cases, greater certainty,” he said, noting that as far back as 2015, a similar OAS mission had outlined recommendations “in order to avoid long lines of voters waiting to cast their ballots”.

“GECOM should consider introducing a standardized process that will allow the verification of, at least, one or two additional voters, while one voter is casting his/her ballot,” he said, adding that considering the challenges, surrounding the use of private residences as polling places in this electoral process, the electoral authority should review and resolve this question, well ahead of the next elections, to ensure that the uncertainty it generated on this occasion, does not reoccur.

Golding said that GECOM should develop a detailed electoral timeframe and plan that include comprehensive descriptions and protocols of the activities and documentation necessary to conduct oversight of the delivery of the Statement of Polls (SOP).

The OAS/EOM leader noted also, Guyana’s largely “manual electoral system” that requires the transportation of electoral materials, including the statements of polls, by land, water and air to the Returning Officers in each of the 10 Regions and to the Chief Elections Officer in the capital.

“The only area of automation in the counting process currently, occurs at the Office of the Chief Elections Officer, where a computer application, specifically designed by GECOM for this purpose, supports the tabulation of the results.

“Development of a technology solution that allows the collection and transmission of images of the Statements of Polls and collated results from regional locations to a central server location in Georgetown, would allow Guyana to implement a more modern tabulation system, which facilitates the publication of preliminary results.”

He said the Mission was recommending that GECOM should consider implementing a system to issue preliminary results for national elections, in order to make this information available on Election Day, or on the morning thereafter.

“This would include establishment of a central, computerized, results-receiving center, where election results summaries are periodically sent, via secure telecommunication lines, from each of the 10 regions across the country, to the Chief Elections Officer. Scanned Statements of Polls can be sent to the CEO, simultaneously, to be published alongside the digitized electoral results.”

In addition, the OAS is recommending that GECOM should also consider including a technology solution in the electoral system, which supports the final tabulation of the results of the election.

“Official tabulated elections results should be available online, through the Electoral Office’s official website, to ensure faster and simultaneous transmission to a wider audience, including political parties, journalists and citizens. This would promote the transparency of the election results.”