New in Pride
Home / Sports / Game 1: The Wily Wizard Vs. The Raptors 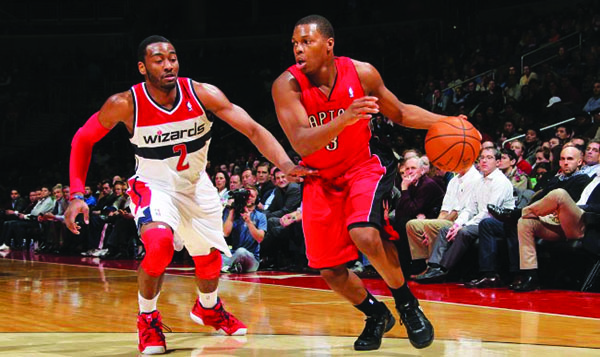 Game 1: The Wily Wizard Vs. The Raptors

Photo above: Kyle Lowry (in red and black) and John Wall did not live up to the point guard battle hype. Photo credit: www.raptorscage.ca.

Based on sound bites from Raptors players and even their general manager Masai Ujiri, one might have thought that the series was against just Paul Pierce, the perennial All-star who signed with the Wizards in the offseason. His comments seemed to trouble Ujiri, who responded with yet another expletive when addressing fans at Maple Leaf Square, prior to the start of the game – he was handsomely fined $35,000 by the NBA league office for his colourful response.

Pierce, the 37-year-old with almost two decades of NBA experience – has played in 149 playoff games.  He seems to know exactly how to bait the Raptors into a war of words. His comments, which insinuated that the Raptors did not have the “It” element of a strong playoff team, might have worked out exactly to his intention.

The villain loves the spotlight

One might have figured that the experience gained from losing to the Brooklyn Nets in last year’s playoffs, would be enough for the Raptors to shake their first game jitters, but Pierce, though, was banking on that experience not being making a difference. He was a key factor for the Nets team who put away the Raptors in seven games, and that experience makes him the only Wizards’ player who knows how to get a rise, and preferred reaction out of the Raptors.

His comment somehow had an effect on the Raptors plays and also drew the ire from Raptors fans. A lot of pre-game comments on Twitter were targeting Pierce, and even before the game started, fans outside the ACC were chanting:

Early on in the game, almost every time Pierce had the ball, Raptors fans vocalized their disdain for the veteran by yelling “Pierce Sucks”.

All this negative attention did not seem to rattle him, and he calmly let his performance – at key moments throughout the game – shut up the fans and their boisterous noise.

Pierce appeared calm and felt very comfortable playing the villainous role. In a post-game interview, he said “I don’t mind playing the role of underdog or villain or whatever you guys want to call it…”

His psychological tactics may have impacted the Raptors in shifting their focus away from their game plan. The game itself was still entertaining and the Raptors played hard but they executed poorly, took errand shots and were outworked on the boards by the Wizards. Pierce even took the spotlight away from the presumed battle of the guards between Kyle Lowry and John Wall. Although both of the guard’s subpar performances might have actually been due to nerves and first game jitters – Lowry fouled out in the fourth quarter with only seven points, and Wall scored only 10 points to go along with his eight assists – the centre of all attention was none other than Pierce.

Explaining the psychology of Pierce’s comments

Here is one way to explain what I believe happened psychologically to the Raptors, as a result of Pierce’s comment.

Imagine if someone told you right before a multiple-choice test, which you had studied for fervently, that ninety per cent of the answers were “B”. The test begins and you begin to read all the “B” answer options with a subliminal bias. Get it?

Pierce, in this scenario is the answer option “B”… and the Raptors seem to have been playing in response to him as opposed to executing their superior offense (Raptors offense was ranked No. 3 in the NBA this season). Teams, players, coaches and even front office personnel will resort to some form of psychological tactics in order to come out victorious. The Raptors might have thought they were in control, but the subliminal bias to respond to Pierce was already in play.

A win is a win

In the playoffs, winning is ultimately the only thing that matters, and how a team comes to this result has little impact on the victory itself. This is the solace the Wizards have despite their own statistically awful game on Saturday.

More to come and the story unfolds

Stay tuned for further analysis and insight in next week’s publication for games two through four. I will provide a breakdown of the underlying game story – will Lowry truly bounce back from his poor performance in the first game? How will the Pierce story continue to unfold in this series?