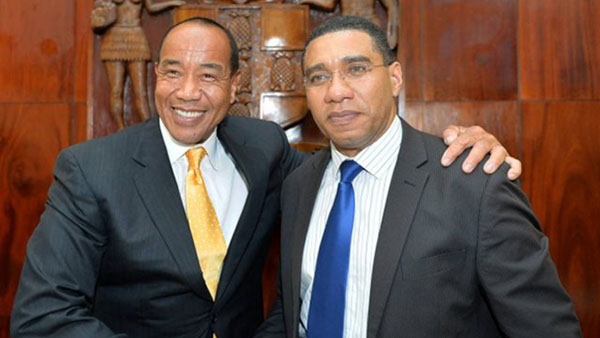 KINGSTON, Jamaica, Apr. 28, (CMC) – Business magnate, investor and philanthropist, Michael Lee Chin, has been appointed head of the Economic Growth Council, established to advise the government on a framework of proposed initiatives that are expected to yield economic growth.

The Council that will have no more than 12 members from the private and public sectors, will make quarterly reports on its progress.

Prime Minister Andrew Holness, who launched the initiative, yesterday, said the Council is not “another layer of bureaucracy,” adding that it is meant to simplify, clarify and expedite economic growth policies.

Holness explained that the establishment of the Economic Growth Council forms part of the government’s drive to bolster economic growth and create jobs for Jamaicans.

He said the formation of the Council and the Ministry of Economic Growth and Job Creation is among the “10 signal commitments” that were made during the lead up to the general election in February this year, that will be met by the government.

“We have struck up a partnership with one of Jamaica’s finest sons, but also a representative of the private sector and someone who has contributed significantly and participated in our civil society,” Holness said, of the appointment of Lee-Chin.

Holness said other persons will be added to the Council and noted that the mission of Lee Chin is to build local and international support for the country’s growth agenda “in practical ways, to bring large investments to the island.”

The Prime Minister said the Council is tasked to work with the technical experts in the Office of the Prime Minister and the Ministry of Economic Growth and Job Creation and all the agencies under that Ministry.

“It will develop the initiatives that we will be held to account for, to raise public awareness and public attention on economic growth and to assist in the process of bringing to the attention of the government where there are bottlenecks, roadblocks and obstacles to remove them from the way, and the path that the investors must travel to bring prosperity and jobs to Jamaica,” he explained.

For his part, Lee-Chin pledged that the Council will work tirelessly to achieve a Gross Domestic Product (GDP) growth rate of five per cent over the next four years.

He called on other Jamaicans to make written and public pledges towards partnering with the government for growth.

He also called on local investors, corporate heads, religious leaders and members of the Diaspora to give their support. “We are all in this together, we are all stakeholders in Jamaica. Heavy work is made less heavy when there are many hands,” he said.

The Economic Growth Council will be appointed for a period of four years and will be eligible for re-appointment. The Council will report to the Prime Minister.