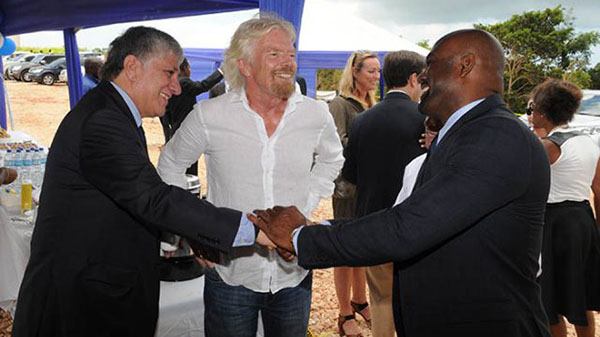 “The signal this has sent is that we are open for business here in Jamaica. These are the kinds of investments that can lead to even bigger and better things, and which our country needs in our drive for economic prosperity and a sustainable future,” he said.

Minister of Finance and the Public Service, Audley Shaw, who was also in attendance, told JIS News that the investment by the British billionaire is a significant move and one that bodes well for the country.

“This is a win-win for everyone. Sir Richard is a friend of Jamaica and the wider Caribbean and someone with a proven track record of success, he said.

Levy said the investment by Branson “is great news for Jamaica and the future of its people. I don’t think we could have selected a better buyer than the Virgin Group and Sir Richard,” he said, noting that the businessman has a passion and commitment to renewable energy.

“This is a very significant investment and one that makes Jamaica the indisputable leader in the region in renewables,” he added.

Branson, in his remarks at the function, pointed out that his primary interest is not to make a return on his investment, but to be part of a global push to achieve carbon-neutral status by 2050.

He added that clean air “is something that has no boundaries and that it is incumbent that we get the wind mills out there, get the solar out there, get the wave energy out there, and create a green energy revolution that brings the cost of energy down for everybody and gets rid of the danger of coal and oil and the dirty-producing energies that we have today.”

The British billionaire, who has a home in the Caribbean, also spoke of his love for Jamaica and his early involvement in reggae music, and his affiliation with the late Peter Tosh.

Speaking to JIS News following the ceremony, Branson said he has been passionate about renewable energy for many years, particularly in the Caribbean.

“As I have been saying frequently, we need to find real world solutions, which will benefit everyone,” he said.

“Energy is generated via a sustainable, natural resource with no emissions from the generation process and thus, will preserve the air quality in and around these local communities which are reputed to be amongst the best in the island,” Levy said.

The US$89 million BMR wind farm has a generating capacity of 36.3 megawatts and is the largest privately-funded renewable energy project in the country. It is also the single largest investment in the parish of St. Elizabeth in over 40 years.

It is expected to reduce the country’s reliance on fossil fuels by about five million barrels, or US$ 500, 000 over the 20-year life of the plant.

Levy said the project has provided significant benefit to the local community, with billions of dollars of direct spending and employment of hundreds of persons during construction.