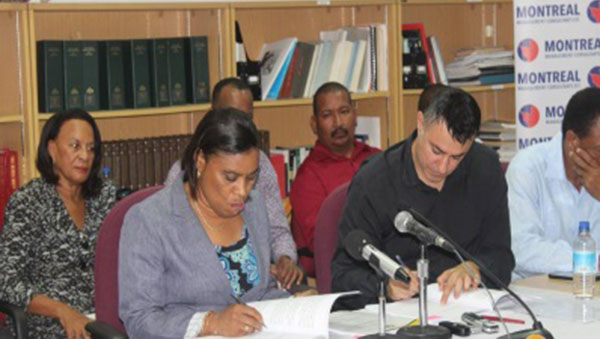 MMCE Project Manager, Chris Timmins, speaking at the signing ceremony, here, yesterday, said that the project would entail the construction of 66 units in each of several communities, like La Plaine, San Sauveur, Grand Fond, Castle Bruce and Delices, on the east coast, in the first instance.

He said in the northern area of Picard, 68 units are under construction and that a further 68 are to be built in Cotton Hill.

“We are also at City Square, which is due to start in the final quarter of this year. It is a total unit, including commercial of 125 units,” Timmins said, after the contracts were signed, between the Financial Secretary Financial Secretary, Rosemund Edwards, and MMCE Chief Executive Officer, Dr. Anthony Haiden.

Timmins told the ceremony that following the passage of Hurricane Maria, last year, that left a trail of death and destruction, revisions had to be made of the housing project in Bellview Chopin, south of here.

“Castle Bruce is scheduled to be completed by June 2019, while everything on the east coast will be completed and handed over. In Georgetown, Picard, we anticipate, and are confident, in July 2019. Cotton Hill, we are comfortable in September 2019,” he said.

“The Roseau City Square, it will be twelve months from commencement, so given the present status, we anticipate the completion, no later than December 2019,” Timmins said, adding that the units will comprise 10 one-bedroom, 55 two-bedroom units, 35 three-bedroom units and 25 commercial units.

“We are proud of our products. We have been on the island now, for two years; we started up in Bellevue on residential construction in May 2017,” he said, adding “we feel that we now are in a position to offer to the country, the most resilient product that is available with modern technology”.